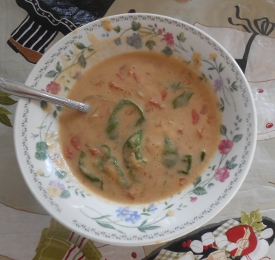 1) In 1472, Portuguese explorers named one of Cameroon’s rivers Rio dos Camarões after all the shrimp in it. This is how the country, Cameroon, gets it name. Way cool. I wish where I lived could be renamed Taco. I love tacos.

3) The world’s biggest specie of frog lives in Cameroon. One of them is called Jeremiah.

4)The yellow stripe in Cameroon’s flag represents sunshine. Antarctica, if it ever becomes a country, should have a white stripe representing snow and a beaker in honor of all the scientists living there.

Cut chicken breast into 1″ cubes. Mince garlic cloves. Dice carrot, leek and onion. Cook noodles according to instructions on package. Rinse and set aside. Beat eggs. Pour egg into pan. Cook on medium heat for 2-to-3 minutes or until egg hardens. Remove egg and cut into thin strips.

Put a drop of water in wok. When drop starts to bubble or move around, add peanut oil. Add chicken, garlic, ginger, pepper, and sambal oelek. Sauté on medium heat for 6 minutes or until chicken is no longer pink. Stir frequently. Add carrot, leek, and onion and sauté on medium heat for another 4 minutes. Stir frequently. Add shrimp and ketjap manis, and stir fry for another 4 minutes or until shrimp turns orangish/pink and is no longer translucent. This dish goes great with peanut sauce or a million dollars.

1) Indonesia is the home of the great volcano Krakatoa. Incomprehensible amounts of ash issued from Krakatoa when it erupted in 1889. The ash in the sky darkened the world for days.

2) Today Krakatoa’s ash would be considered a health hazard. Schools would close as a health precaution. School kids everywhere would hope for volcanic eruptions. But too much ash would block sunlight to such an extent that plants couldn’t photosynthesis and so, die. Our end would come soon, delayed only the frozen burritos in our freezer. And if the only thing in our freezers was lutefisk, we’d wish the volcanic eruption would have taken us right away. So, be careful with your wishes.

food processor
a wok would be nice as well

Add pork, garlic, cornstarch, hot-pepper paste, red pepper flakes, oil, sherry, and soy sauce to mixing bowl. Toss ingredients until pork is thoroughly coated. (You make take the toss instruction in a non-culinary way if your guests look upon your efforts and say, “Ew, I don’t like Chinese.”)

Add peanut oil, sesame oil, and ingredients from mixing bowl to skillet. (Ask for a wok for Christmas.) on medium-high heat for 2-to-3 minutes or until pork is no longer pink. Stir frequently. Add tofu. Sauté for 1 minute or until tofu is heated through. Stir in chicken stock and cook covered on medium-high heat for 2 minutes. Goes well with rice.

1) It’s comforting to know that the Earth’s orbit will not be affected if all billion or more Chinese jump off a chair at the same time. Physicists say so. So there. So no nation needs to develop a counter-jumping program.

2) However, an experiment in Britain in 2001 had school kids jumping off chairs at the same time. The reason for this trial completely escapes me. Sounds like fun though. Anyway, this scientific research caused a 2.0 earthquake. 2.0! Pshaw, I’m from California. That’s not an earthquake. Pish!

Posted on November 2, 2013 by pauldelancey

Cut pumpkin shell into large pieces. Remove seeds and those gooey strings that go along with the seeds. Cut off edible pumpkin part from outer skin. Cut edible part of pumpkin into cubes no bigger than 1/2″. Mince onions. Dice tomatoes, turnips, potatoes, carrots, cabbage, and spinach.

1) Pumpkins are a fruit. Who knew? They have been grown for 7,000 years. The first were grown in Central America. I grew a pumpkin when I was a kid, way too late to be the first grower.

Cut chicken into 1-inch wide strips. This will be easier when the chicken is already partially thawed. Mince garlic clove.

First, roll a chicken strip in flour until all sides are covered. Second, submerge the strip in the egg bowl. Third and last, roll the chicken in the bread crumbs until it is completely covered with bread. Repeat these three steps for all chicken strips. The order for this procedure is particularly important.

Put peanut oil and sesame oil in electric skillet. Heat at 350 degrees. Drop the coated chicken strips in the oil. (Be sure to keep the skillet’s lid between you and the skillet as hot oil might splatter out toward you when you drop the chicken into the skillet.) Cook for 4 minutes, or until golden brown, and turn all strips. Cook for another 4 minutes until the same wondrous color shows up on all of them.

Put paper towels, or napkins, on plate. Put strips on towel. This dish is even tastier with the honey-mustard sauce recipe listed in the next recipe. (A culinary cliffhanger!)

1) Time to reveal a secret. No one will believe you’re a serious cook unless you say the words, “golden brown,” every five minutes.

2) In the same five minutes, a rocket achieving escape velocity will have soared 2,100 miles.

3) That rocket will fall apart as stage after stage separates and plummets to the Earth.

4) You, however, will not fall to pieces by saying, “Golden Brown.”

5) The famed country singer Patsy Cline fell to pieces whenever you walked by.

7) Time to expand the genre.

Posted on August 7, 2012 by pauldelancey

This recipe is rightly called a bash. It makes about 16 to 20 patties.

Mince onion, bell peppers, and cloves. In large bowl, mix all ingredients except buns. (Don’t mince your own buns; that would be a disaster.) Be sure to make patties smaller than your spatula.

Coat bottom of frying pan with no-stick spray. Cook burgers on medium-high heat. These hamburgers are moister and more prone to crumble than their American counterparts. So, make sure you have the entire patty on top of the spatula before you turn them over. Turn them over carefully. Do not flip them. Turn them over once.

1) There have been many mass migrations and conquests throughout history. Some examples are: Alexander the Great’s conquests, Rome’s conquest of the Mediterranean, Germanic tribes overrunning the Roman Empire, Arab conquests of North Africa, Mongol invasions of China, Persia, and Russia, and Spanish victories in Central and South America.

2) What do all these bloodthirsty conquerors have in common?

3) None of them ate hamburgers.

4) With or without cheese.

5) They didn’t even eat sliders.

6) Geez, the Romans ate thrush tongues, for goodness sake. What would it have hurt them to eat a Chinese Hamburger?

8) And then there would have been no Dark Ages. Learning would have flourished. We would have had colonies on the moon by the 17th century if only the Vikings had eaten burgers.

1) Rice is much more popular in Asia than in the United States.

2) However, Sam Rice, of the 1924 Washington Senators, was very popular in Washington, D.C. It is doubtful many in Asia had ever heard of him.

3) 1924 was the only year the Senators won the World Series.

4) In the 1960s, some losers of the World Series later toured and played in Japan.

5) Japanese samurais of the 10th to 16th centuries were famous for their swordsmanship.

6) So naturally, samurai trading cards were all the rage in Australia in 1965. There was even a well-watched t.v. show called Shintaro.

7) I had an outfit just like Shintaro and a genuine toy sword, too.