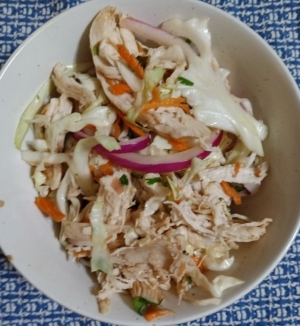 Add chicken and salt to pot. Add enough water to cover chicken. Bring to boil using medium-high heat. Reduce heat to low-medium. Cover and simmer for 15 minutes or until chicken is cooked through and tender to the fork. Remove chicken and shred with two forks.

Add dressing ingredients to bowl with chicken and salad. Toss salad and dressing with two forks until well blended.

2) You can tell my synapses are really firing today.

3) Shredding is also a surfing term. It means to surf a wave in a flamboyant and adept manner.

5) Wouldn’t The Two Meanings of Shredding be a great title for a book on Eastern philosophy?

6) Potato chip is a derisive term for a ridiculously small surf board.

7) Note that a small surf board is relative to the size of a surf. What is a potato chip for a 6′ 7″ man would be an okay board for a petite woman.

9) Because chickens are so small to start with.

10) Most chickens never master the art of surfing. Turkeys never do. Roosters could shred the waves if they would only concentrate. But after every successful maneuver, they’ll crow to the heavens, lose sight of the waves, and wipeout. And let me tell you, there’s nothing surlier than a rooster that’s bailed.

11) However, a small number hens can really surf. If you’re lucky you can see hens shooting the curls at your local beach. But if you want to be guaranteed world-class hens shredding the waves, you really must attend the Hilo Chicken Surfing Invitational every May. Be sure to book right away. Tickets and rooms disappear months in advance.

Serves 4. Takes 2 hours to bring to room temperature and 1 hour 45 minutes to cook.

Fill large bowl with ice and water. When instant pot has stopped cooking, set valve to release steam. (Oh gosh, this is important.). Slowly release lid. Use slotted spoon to remove eggs and transfer them to large bowl. Allow eggs to cool in ice water for 10 minutes or until they are cool enough to peel. Peel eggs.

These eggs have a nutty taste.

Put eggs on benches in sauna. Let eggs cook for 7 hours at 200 degrees Fahrenheit. Let eggs cool in ice water and peel in ice water. All this is a wild guess. I don’t have a sauna. I don’t know anyone who has a sauna who’d let me cook eggs in it for 7 seven hours. I do know that eggs already cooked in a sauna or in an instant pot are quite an appreciated appetizer for Korean sauna goers.

1) South Korean chickens lay their eggs in saunas. Not for seven hours of course, that would turn their would-be offspring into Sauna Eggs. No they just lay their eggs on the sauna floor and then roll them outside. The short time in the sauna is enough to toughen the chickens to be for the rest of their lives. And, oh my gosh, the mama hens, laying eggs time after time in the sauna, become super tough and resilient. So much so that the South Korean army positions an entire division of sauna hens along the armistice line with North Korea. No army in the world has trained enough to fight sauna chickens and no soldier is brave enough to attack them. 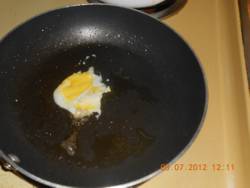 Many, many recipes are for too many people. What do you do in these cases? For example, if your recipe serves four and you’re cooking  for two people, you’ll need to cut the amount of each ingredient in half. If the recipes calls for two tomatoes, use just one. But what do you do if the recipe asks for three eggs? Half of 3 eggs is one and a half eggs.

How do you get a half an egg?

It would be nice if your local supermarket sold half eggs. This remains unlikely to happen as these food stores don’t even let you buy purchase individual eggs. Back in my youth, we had a woman who raised her own chickens in her backyard. She would let us buy any number of eggs. Then the town shut her down.  However, even she didn’t sell half eggs. Her hens just never produced eggs half the size of normal ones. Whether they were unmotivated, conservative, or just plain unable to lay tiny eggs, we’ll never know.

Perhaps a laser beam followed immediately by a thin blast of air, the temperature of absolute zero, could produce an egg that is not only cut in half but also keeps the yolk and the white inside. Future research is indicated. However, I doubt that this idea, however successfully concluded, would prove commercially viable. I’m guessing that such a half egg would cost a million dollars. Most consumers would balk at such a price.

No, I’m afraid that the making of a half an egg falls squarely on our shoulders. Crack an egg open into a small dish. Scoop out half a yolk the best you can with a spoon. Do the same with the egg white. Now you have your half an egg. You can proceed confidently with the newly reduced recipe. The above photo shows a fried half an egg.

Posted on August 1, 2018 by pauldelancey

rice cooker
fists of fury (See above note.)
x-ray vision (It helps to be a super hero.)
up to 12 dipping bowls, bowls, or small cups

Cut 2″ ginger root into ¼” slices. Add ginger root slices, 4 cups chicken broth, water, and water to large pot. Bring water to boil in large pot at high heat. (The recipe gets harder after this.) While water comes to boil, cut chicken into 1½” pieces. Coat chicken with sesame oil. Add chicken to pot. Cover, reduce heat to warm and simmer for 20 minutes or until chicken is no longer pink inside. (You can check this with x-ray vision or by slicing open one piece of chicken.) Remove chicken from pot and add to mixing bowl. Save chicken stock.

While the water for the chicken comes to boil, tie pandan leaves into a knot just like you would with a string. Add 4 cups chicken broth, pandan leaves, and rice to rice cooker. Cook according to instructions for rice cooker. (Probably, just push the “cook” button until it stops cooking.) While chicken simmers, mince garlic and dice 3″ ginger root. Add garlic, ginger, and vegetable oil to pan. Sauté at medium for 5 minutes or until garlic and ginger browns and becomes fragrant. Stir frequently. Add rice and stir fry at low-medium for 3 minutes. Stir enough to prevent burning.

While water for the chicken comes to boil and rice cooks, dice cilantro and green onion. Cut cucumber into thin slices. Add diced green onion and chicken stock from large pot to a small dipping bowl for each guest. Each guest also gets a dipping bowl for the chili-garlic sauce and the soy sauce. Add chicken to plates. Garnish chicken with cilantro. Add rice to plates and shape into dome. Place cucumber on plate beside chicken and rice.

3) You don’t have to lock your doors if you’re raising sane hens.

4) However, if you’re raising insane hens, oh boy! Insane hens naturally form gangs and terrorize the countryside. Indeed, a particular brutal gang of Rhode Island reds went on a car-jacking spree in Hicken County, Colorado back in 1969. You can imagine the difficulty the Colorado Tourism Board had in hushing that up.

5) By 2006, intelligent, insane hens had penetrated all the major American banks and brokerage houses. Their coop smarts and the fact they could lay fresh eggs without even taking time off from work gave them an irresistible leg up on all other applicants. I mean omelettes need fresh eggs.

6) In turn, the hens wanted worms. As they climbed the corporate ladders, they wanted ever more costly worms and ever fancier worm meals. By late 2008, the demand for pricy worms and gourmet-worm chefs had far outstripped the supply. More and more, the large financial firms were forced to feed ordinary mash to their top-revenue-generating hens.

7) Mash ticked off the executive layers, so much so that they engineered the Great Recession of 2008. Now prospective chicken hires must assert their mental stability with the oath, “I, a sane chicken . . .”

Posted on October 5, 2016 by pauldelancey 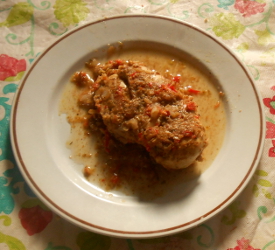 Add all ingredients to blender except chicken and cilantro. Blend on medium speed or until ingredients form a paste. Place paste and chicken pieces in large mixing bowl. Turn chicken pieces around until they are thoroughly coated with paste. Cover and marinate in refrigerator for 4 hours. Preheat oven to 375 degrees. Bake for 20-to-40 minutes or until chicken is no longer pink inside. Baste every 20 minutes.

1) Even roosters like my recipes. To impress hot hens, they dance around, repeatedly drop and pick up tidbits of food, and make food calls. This ritual is called “tidbitting” after the Tidbit section of my recipes. Wow, I’m honored.

2) Sultry biddies prefer males who tidbit often. They also go squooshy for roosters with brighter, large combs atop their heads. Size matters, even in the poultry world.