Posted on January 7, 2016 by pauldelancey

Makes 3 quarts. Takes 45 minutes plus about 6 hours in freezer.

Add hokey pokey chunks and ice cream to plastic container. Stir gently with spoon until hokey pokey is evenly distributed. Cover and put in refrigerator for 6 hours or ice cream is firm.

2) The hokey pokey was used to devastating effect by English forces in the battle of Waterloo in 1815. In a desperate gamble, the French Emperor Napoleon hurled his vaunted Old Guard at the center of the English infantry line. Onward, ever onward they marched, their jaws clenched tightly together by glue-like oatmeal. The English line buckled. One more push and the French would triumph. Napoleon would remain emperor. He would continue to march his armies all over Europe. Europe would continue to be drenched in blood as Napoleon engaged in ceaseless conquest and pursuit of La Gloire.

3) Private Henry Tavert of the English tenor-infantry brigade began to shake in terror. His sergeant growled. “Pull yourself together, man.”

6) Henry managed a weak smile. “I can do that. Me mum used to sing the hokey pokey to me whenever I got afraid. It gave me courage, it did.”

7) “Then private, sing the hokey pokey.”

8) And so Henry did, weakly at first, but with increasing conviction and volume with each successive word. The rest of the tenor brigade joined in. When they all got to the part about turning “yourself about,” the song could be heard by the bilingual sergeants of France’s Old Guard.

10) “D___ me,” shouted the sergeant, “The Frenchies are fleeing. Fix bayonets!” He pointed to the retreating French. “England, put your whole selves out.”

11) The tenor brigade charged. Brigades to their left and right advanced as well. Pretty soon, the entire English army rushed the French. The French retreat became a rout. Napoleon’s once mighty Grande Armée disintegrated never to reform. Europe was finally at peace.

12) Europe stayed at peace for another 99 years. Whenever a country poured it armies across its neighbor’s borders, the defenders would sing the hokey pokey and make the attackers turn themselves about. War became pointless and boring.

13) Until 1913, when countries issued ear plugs to their armies. Soldiers couldn’t hear the hokey pokey and so would no longer turn themselves about. World War I, a horrific bloodbath, commenced only one year later. We need to come up with a countermeasure to ear plugs.

Make four patties. Fry patties at medium-high heat with lid on for about 6 minutes or until the insides of the patties are done to the desired level of pinkness or brownness. Flip patties once.

While patties are cooking, cut tomato into ⅛” thick slices. Peel avocado and remove pit. Cut avocado into four slices lengthwise. Toast hamburger buns. Put a patty on bottom bun. Put tomato and sautéed onion slices and 1 lettuce leaf on each patty. Top with beetroot slice, if desired. Add top bun. Combine the bottom and top parts of the burger. Repeat for the next 3 burgers.

2) Sheep can be shorn for their wool. Wool makes nice clothes and blankets for people to use. People get haircuts. However, sheep do not wear wigs made from human hair, not even if they wonder what it would be like to be a redhead.

3) Law enforcement can track you with your cell phone’s GPS. Smart sheep can do the same, so Mary’s little lamb doesn’t need to follow Mary anymore. This is why you don’t hear the nursery rhyme anymore. 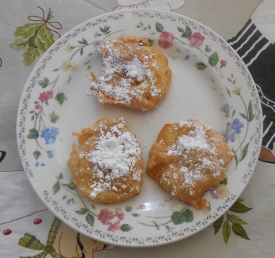 Add flour and beer to large mixing bowl. Use electric beater on medium setting until there are no lumps and the mixture thickens in batter. If mixture is liquidy after lumps have disappeared, put mixture into refrigerator for 5 minutes. Peel and core apples. Cut into 6 rings each. Coat apple slices into flour/beer mixture.

Add oil to skillet. Heat electric skillet to 375 degrees. Add coated apple slices to skillet. The oil should cover the slices. Fry apple slices for about 2 minutes on each side or until golden brown. Remove fried slices, or fritters, and place on paper towels. Repeat until done. Sprinkle fritters with lemon juice and dust with confectionery sugar.

1) Belgians believe eating cabbage on Shrove Tuesday will prevent Belgium’s cabbages from being devoured by caterpillars and flies. Works for me.

4) Indeed, Shrove Tuesday is also known as Pancake Day in protestant Britain, New Zealand, and Canada and in catholic Ireland as inhabitants on those happy countries would traditionally eat pancakes and engage in run-on sentences on that day. It’s gratifying to know that food, pancakes in this case, brings amity, peace, and contentment to nations with histories of political and religious differences. All we are saying is give pancakes a chance.

Posted on August 5, 2013 by pauldelancey

Put a turkey dog near one end of a dough piece and wrap the dough around the turkey dog. Put this creation on a cookie sheet so that the dough overlaps on the bottom Otherwise, the dough might break apart. Egads. Brush dough with butter. Sprinkle dough with sesame seeds. Gently press seeds into surface of dough-wrapped turkey dogs.

Bake in oven at 400 degrees for 8-to-13 minutes (Yes, there is a lot of variation between ovens) or until dough is golden brown. Be sure to watch your pepper jack birds in a sesame blanket to make sure they don’t burn or cook unevenly. You might need to turn them over once if they appear to browning too quickly on the top while remaining doughy on the bottom.

Remove from oven and let cool for several nanoseconds before eating. ☺

1) The cardinal is a bird. The St. Louis Cardinals use bats when they are at the plate.

3) The New Zealand Kea bird feasts on rubber strips around car windows. Can we use this knowledge to dispose of discarded rubber?

4) More than 10,000 birds a year die from colliding with windows. On the other wing, bird collisions have been known to bring down airplanes. Israel has lost more fighter planes to birds than it has in all its wars.

5) Chickens can run at a speed of 9 miles per hour. This figure is for short distances only. Chickens do not possess the stamina for the marathon or even the mile. The human record for the 100-yard dash is 9.2 seconds, or 23 miles per hour. So even if you are only half as fast as that, you will be able to outdistance any enraged chicken.

6) Well, as long as they don’t fly. The longest recorded flight of a chicken is 13 seconds. The longest distance for a solo chicken flight is 301 feet. Watch a chicken fly in this video for SmirnoffTM: http://www.metacafe.com/watch/160787/flying_chickens/.

7) It’s quite possible air forces everywhere have nightmares about flying chickens. If birds can accidentally decimate the Israeli air force, can you imagine what would happen if chickens took to the skies filled with blood lust?

8) An uneaten chicken can live to be eight  years old, an eaten one goes earlier. The popularity of chicken in cuisines around the world might really be prompted by nervous air force commanders.

9) Moles cannot fly. They are never found on the menus of air-force bases.

11) Compare that achievement to the construction crew that’s torn up that important street near your house for two months just to dig a tunnel for sewer pipes. I say fire the human crew and replace them with moles who will get the excavating job done in no time. We will probably still need humans to place the one-ton sections of sewer pipes into the ground. As of press time, moles have shown no real inclination to operate heavy machinery.