* = Beef is the most popular meat for this in Mexico. Goat is also popular. Regions in Mexico usually have a strong preference. But NO ground meat.
** = Bananas leaves and avocado leaves are mighty hard to find outside of Mexican or Asian supermarkets. If you cannot find them, use cornhusks, parchment paper, or tin foil as a substitute. Leaf or leaves should be able to cover the width of the slow cooker.

Rub salt onto lamb. Cut lamb into as many pieces necessary to fit them in a slow cooker. Add oil to pan. Heat oil at high heat until it starts to ripple. Carefully, carefully add lamb pieces. Sauté lamb at high heat until all sides are well seared or you get a dark-brown crust on the lamb. Turn over to sear the other side of the meat.

While lamb cooks, dice cilantro. Thinly slice onion. Cover serving platter with banana leaf. Place shredded lamb on banana leaf. Ladle juice from slow cooker over lamb. Sprinkle with lime juice. Warm tortillas by placing on pan with the heat set at medium. Remove as soon as they get warm. Or microwave tortillas for 10 seconds. Fill tortillas with lamb. Garnish with cilantro and onion. Goes well with with green salsa.

1) The stars in our universe exhibit a red shift. That’s because they’re moving away from us. This observed red shift in our celestial orbs gave rise to the Big Bang Theory. The color red makes objects move things move from other things. For example, forest fires are red. Forest fires move away from their starting points.

2) Red picnic-table cloths, left unchecked, would move themselves away from the picnic table. This is why people have potlucks. The plates laden with potato salads, hot dogs, and corn on the cob provide enough weight to counteract the Moving Away Force (MAF) on the red table cloths.

3) The Germans experimented with red tablecloths in World War II. They hoped their table cloths would move away from the ground and into the path of Allied bombers. The red objects, however, moved away from the bombers as well. These Nazi tablecloths still continue outward trek. Look for them in the Asteroid Belt, if you have a powerful enough telescope.

4) Naturally, other red objects such as plates exhibit MAF. A totally red plate would leap off the kitchen table and crash through a window in a quest to join its brethren in the Asteroid Belt. Plates with only a tiny bit of red in them display a tiny MAF. (See above picture.) Such plates require only a little bit of food to keep them in place.

5) Of course, blue objects show Moving Toward Force (MTF.) This is why so many people end up wearing blue shirts. To be safe, you really should avoid blue and red altogether. If, however, you must use these colors, for Pete’s sake, you them in equal amounts. (See above picture again.)

Posted on February 7, 2017 by pauldelancey 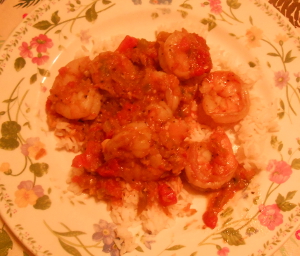 1) The shrimp in the above photo are on the plate because they are subject to the laws of gravity.

4) And whoosh, off they float to Mars.

5) Whenever you see a meteorite streaking away from Earth, that’s really a shrimp going home to Mars. They’re not burning up, rather they are traveling so fast they give off a red shift.

6) NASA would dearly love to know how shrimp can negate gravity and float across space at near light speed.

7) NASA has determined that the shrimp’s shell is impervious to friction-generated heat, so that the little crustaceans can zip back and forth through the Earth’s atmosphere with impunity.

8) OK, NASA also wants to build a spaceship as durable as shrimp shells.

9) This is why the NASA cafeteria serves shrimp creole every single meal. Every single day. They are saving the shrimp shells for structural analysis. They also hope to gather enough shrimp shells to make a space shuttle.

10) Unfortunately, shrimp creole tastes better if you boil the shrimp shells. So, they go into the shrimp creole. This is bad, while shrimp shells resist the heat of speeding through the atmosphere and they stand up to the wetness of water, become too pliable when boiled in water. As we know, flimsy shrimps shells are useless for the rigors of intergalactic travel. Thus, the scientists can never get enough shrimp shells.

13) And whoosh, the shark is taken along at near-light speeds through the atmosphere. Where they die. This is why there are not more sharks in the oceans. It’s always why aquariums occasionally misplace a shark.

14) But all this will change when the oceans get too hot for the shrimp shells. So, the shrimp have been migrating back to Mars.

15) Those canals you see on Mars have all been built by shrimp. They need places to swim.

1) When objects recede from you at a very fast rate, say 43.7 miles per second, they will look redder than they really are. Astronomers call this display a “red shift.”

2) The entire universe is expanding. This is why some marriages fail. The partners are literally getting farther apart from each other every second. And that brown freckle? The expanding universe makes it looks redder as well. The freckle now looks like a hickey to your already suspicious spouse. Harsh words get said, words that can’t be taken back and soon you’re on your way to divorce court when a cop pulls you over for going 43.7 miles per second, which is way more than you thought your Honda FitTM could do even with high-octane gas. You try to tell the lawman that your speed comes from the expanding universe. He shakes his head. “Like I haven’t heard that one before.”

3) This is also why many people haven’t eaten this recipe’s red entree. Kulu’wa. The redness means it is moving away from you at 43.7 miles per second. You really have to be a speedy eater to get even one delicious spoonful in your mouth. Why, in just one minute your kulu’wa has made across the country. Most of my red soups end up at my brother’s kitchen table. He says, “Thank you.”

4) One of my tomato soups ended up at Cape Canaveral. NASA quickly bolted it down and is currently investigating its possibilities in powering intergalactic space travel. 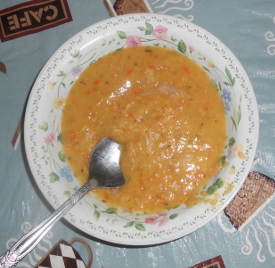 Drain and rinse peas. Add peas and 6½ cups water back to large pot. Add pork to pot. Bring to boil using high heat. Let boil for 2 minutes. Stir occasionally, enough to keep peas from sticking to bottom of pot. Reduce heat to warm, cover, and simmer for 1 hour. Stir gently and occasionally. Skim off any form and pea skins.

Add ⅛th of the pork slices to each serving bowl. Ladle soup from pot into serving bowls. This soup goes well with potatoes and Swedish mustard.

1) The light emitted from stars appears to be red. That means they are moving away from us. Scientists used this knowledge to formulate the Big Bang Theory.

2) The Big Bang Theory holds that everything in the universe started from a teeny, tiny point, then pow! it exploded like an egg in the microwave.

4) I did that experiment in my college dorm. While I found that the kernels did indeed pop outward, they did not travel far and certainly not fast enough to exhibit a red shift.

5) Which would have been cool, although I wonder about the damage to the dorm walls caused by popcorn traveling at 100,000 miles per second. Probably would have gotten me kicked out of college.

6) On the other hand, NASA certainly would have contacted me. I mean they spend billions and billions on launch rockets that can only achieve about 7 miles per second.

7) Of course, sending a manned space station to the outer reaches of our galaxy at such a terrifying speed would require a really big popcorn popper.

8) But America is a land of ingenuity, and a relentless dedication to innovation. If we want to build a popcorn popper that can fling a space station into outer space at 100,000 miles, we will do so. After all, we have invented sliced peanut butter.

9) Sweden, however, is certainly way ahead of America in the race to invent the near-light speed popcorn popper.

10) Look at the title of this recipe. Look at the above picture. The Swedes like yellow split peas. This means they prefer this color of split peas over green ones. Or . . .

11) Swedish have discovered a way to hurl their split peas at such a prodigious rate that the light emanating from their legumes appears yellow. That’s not quite as impressive as a red shift sure, but it’s some million times faster than the speediest military jet.

12) Sweden has not been at war for 200 years, even though two world wars raged all around it in the twentieth century. Why?

13) Sure Germany and Russia built impressive tanks, fighter planes and bombers. But no country’s military stands a chance against a nation that can fling hot, nearly molten split-pea soup toward it at over 100,000 miles an second.

14) Or even 50,000 miles a second. And Kaiser Wilhelm II, Hitler, and Stalin knew it. So they left it alone, even though that happy Nordic land has such wonderful pastries.

15) You can order this tasty soup when visiting Sweden, but I wouldn’t recommend it. Soup that travels that fast is impossible to eat. Best try making yellow pea soup from this recipe. Just be sure to buy yellow split peas that are stationary. Doing so isn’t always obvious. You might have to read the packaging for the peas.