I am ready. I am able to dispense with stupendously bad advice. It’s one date late because:

1) I was serving on the Neighborhood Plate Tectonics Watch.

2) I was wondering where all my orphan socks went to.

3) I spent all afternoon thinking it would be way cool to be able to walk on the ceiling.

TLR asks: Should I put a nasty note on this truck?

Dear TLR: No, as tempting as that might be, you can’t out puswad a puswad. Unless, of course, you have access to a particle accelerator. First, rent a large tow truck. Put the puswad’s truck on the tow truck. You might need to buy and speed read, The Complete Freaking Moron’s Guide to Operating a Tow Truck. You should also buy, The Complete Freaking Moron’s Guide to Speed Reading. Okay, the offending truck is ready to be towed.

Drive your tow truck to a site with a large particle accelerator. Ask to be let in. Note: your chances of success go up if you say please and thank you. If they say no, you can probably bash down the gate with your heavy tow truck. One inside, get the mean person’s truck into the particle accelerator. You will have to work quickly if you bashed down the gate. Press the button marked, “Accelerate,” and whoosh, the meanie’s truck will soon reach a velocity close to the speed of light. Any collision between the truck and particle accelerator’s walls will disintegrate the truck. Sweep up the atomized bits of truck–cleanliness is always in style–and go back to the parking lot. Place the back of atomized truck pits where the truck originally took up four spots. Add a sign that reads, “Next time it will be you that gets atomized if you park like a jerk.” Now that will get the jerk’s attention.

KD asks: Will it ever be acceptable to openly roll one’s eyes when one sees someone do something ridiculous like hold up entering the bus to finish a text? O_O

Dear KD: Oh yes, it already is. However, just rolling your eyes is no longer enough. The texting doofus needs to be taught a lesson. Simply throw a loosely wrapped package of lutefisk, five pounds should be heavy enough, at the texter. The force and stench of the hurled lutefisk will knock him backwards and onto the sidewalk. He’ll a nasty bump on his head that he’ll never forget. Don’t worry about the people on the bus. They’ll be happy that the bus will no longer be delayed. They’ll also never have to smell that lutefisk again. It’s a win-win outcome for everyone.

CA asks: What is the sound of one hand clapping?

Dear CA: The metal thingy hanging from the metal of a giant six-foot high church bell is called a clapper. This is your clue. Simply climb up the side of a church–the Spanish missions in California are good places to try–and get inside. You’ll need to wear clothes that match the color of the church’s walls or you’ll be spotted and stopped. Once inside the bell, smash your hand into the side of the bell. The sound you’ll hear before becoming permanently deaf will be the sound of one hand clapping.

CC asks: What’s a good date plan for a couple that have been married for over 30 years?

Dear CC: After 30 years, you’ve probably done every possible type of date there is. Except, sky diving over an active volcano. Hire a pilot to fly you over the center of the lava spurting volcano. You might have to ask around a lot before you find one willing to do this. Be persistent.

Simply strap on your parachutes and jump out the plane. Be sure to wait for the pilot’s signal. Safety, as always, is important. When the time is right, pull the cord and your parachute will deploy. Did you take parachuting lessons? I hope so. Twist so that at the last moment you will veer away from the death-vomiting volcano.

Is this dangerous? Yes, it is. But if all goes well, you and your sweetheart will have drawn closer together, your love forged even stronger by fire. And sitting close to each other on a couch looking longingly into each other’s eye will be just what you’ll want to do for the rest of your lives.

MA asks: If you write a book about failure and it doesn’t sell, would it be a success?

Anyway, being a dictatorship and all, the Chinese government tries real hard to suppress all discontent against them. They are indeed very thorough about this. And it’s an atheistic ruling body as well. So, it’s real hard to believe they’d let you see a monk. So you’ll have sneak your way to one.

Two possibilities exist. First, fly to Shanghai. Slip by customs without being noticed. May I suggest pointing at the sky and yelling, “Look, Halley’s comet!” Continue to be invisible as you ride trains and busses to a monastery. Ask a monk. Get an answer. Revel in the enlightenment before sneaking your way back home. Second. fly to Bombay, now Mumbai. Take the train to the Tibetan border. Hire a Sherpa guide. Bring oxygen canisters to help you breathe as you cross the Himalayas. Oh and a warm fur parka will help you with the intense cold. Don’t forget to watch for bullets. The Chinese and Indian armies are currently skirmishing with each other. As above, get your answer and come back home.

Cook for 5-to-10 minutes on medium heat or until beef browns. Add potato cubes. Reduce heat to low and simmer for about 30 minutes or until potatoes are soft. Stir occasionally.

Goes well with rice or Indian bread such as roti. The Guyanese version of roti is in this cookbook.

1) Recipes for meat in a spicy sauce date back 3,700 years to Babylonia. Recipes were kept on clay tablets. Carrying around a hundred recipes would have required a wheelbarrow.

2) Did ancient Babylonia possess wheelbarrows? If not, that would explain why the Babylonian empire fell to invaders. The population was too busy carrying clay recipe tablets in their arms to defend themselves.

4) People will begin to crave for curry because the spices arouse and stimulate the taste buds. Sorry, people that’s all curry arouses.

5) In America, many more women appreciate a box of chocolates from their date than a bowl of curry particularly if the bowl has no lid and she’s holding it on her lap and your take the corner really fast or you accelerate really fast and the curry gets all over her dress and she kicks you out of the car and you have to walk home even though it’s your car and you never see her or your car again.

6) No, guys, it’s a much better idea to give your date a bouquet of flowers and box of chocolates and take her out to an Indian restaurant, for goodness sake.

Posted on February 8, 2013 by pauldelancey 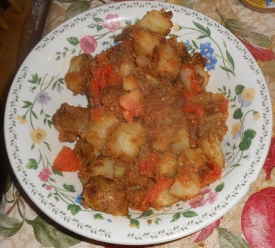 Put enough water in pot to cover 4 potatoes. While water is heating to a boil, wash potatoes. Cut each potato into about 12 pieces. Mince onion. After water comes to a boil, add potatoes and salt to pot. Boil until potatoes are done but still firm to the fork. This takes about 6-to-10 minutes.

Add potato pieces. Stir potatoes gently until they are fully coated with oil and spices and soft to the fork.

2) Ginger, the spice, not anyone named Ginger. Goodness.

3) Ginger has been and still is used for curing upset stomaches and motion sickness.

4) Ginger reduces headaches by blocking prostoglandis, whatever that is, responsible for inflaming blood vessels in the brain.

6) Ginger Rogers brought amazing grace and style to the movies. She really could act and dance.

8) They served hamburgers. You could put your fixin’s on them. I don’t think any of them were ginger.