Posted on October 3, 2022 by pauldelancey 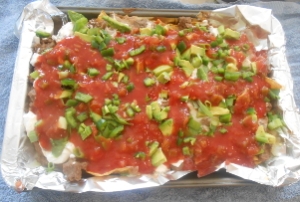 * = It might be hard to get exactly one pound. Manufacturers of canned are notorious for gradually shrinking the sizes of their products. It’s much easier for them to make money by shrinking sizes than by raising prizes. Boo.

** = Some people love black olives. Others hate it. Are our special forces forcing olives on prisoners to make them spill important information? It’s hard to say; no one’s talking.

1) Sometimes great inventions take place slowly. Here, progress occurs only after much brainstorming and experimentation. Such is the case of heavier-than-air flight. Your flight to see your Aunt Minnie most likely took place in a heavier-than-air jet. BoeingTM and AirbusTM have manufactured thousands of heavier-than air passenger planes.

3) Señor Ignacio Anaya opened up his restaurant, “Victory Club”, one fine morning in 1940, little dreaming that was destined for greatness and that he would change the trajectory of humanity forever.

4) A regular customer–We know her name! Her name was Mamie Finan, oh dear lady, blessed by fate!–came into his Anaya’s establishment. She had three female friends with her. This quartet had crossed the border from Eagle Pass, Texas to do some shopping in Piedras Negras, Coahuilla and had gotten quick peckish.

5) “Senor,” said Ms. Finan, “we’d like to try something different today. Would you be a dear and make us a totally new snack?”

6) The worthy restauranteur went to the kitchen. What to make? What to make? He saw freshly made tortillas. Then the culinary gods struck Anaya’s brow with cosmic inspiration. He fried those tortillas and cut them into triangles. He topped the triangles with shredded Colby cheese. He quickly heated the cheese-topped tortilla triangles. Anaya was on a roll. Adding sliced jalapeño pepper provided the crowning touch to his ground-breaking pièce de résistance.

8) Why? Because Señor Anaya’s first name was Ignacio. The nickname for Ignacio in Mexico is Nacho. But the dish didn’t have be called ‘nachos.” It could have just as easily been named one of the following:

But I think we all agree that Nachos was the best choice.

10) Other dishes are named after people as well. Some of these culinary delights are:
Napoleons – named after the French emperor Napoleon.
beef Wellingon – named the English general who defeated Napoleon
franks – named after Frank. We don’t know he last name because he never routed any enemy army.

Posted on January 5, 2014 by pauldelancey 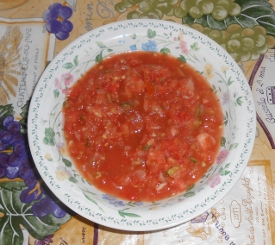 Remove seeds from serrano chiles if you desire a milder salsa. Put chiles, garlic, onion, tomatoes, and oil in baking dish. Stir until garlic, onion, and tomatoes are well coated with oil. Roast in oven at 350 degrees for 25 minutes.

1) May, 1997, was National Salsa Month. Our officials have too much time on their hands.

2) In 2003, Texas declared tortilla chips and salsa to be the Official State Snack. The Texas government has too much time on its hands.

3) Pace Foods uses over 20 million pounds of hot peppers every year. That’s a lot of peppers or maybe just one huge pepper. Can you imagine a pepper that big? If you managed to eat it you’d need a really huge glass of milk to coat the pain receptors in your throat.

4) It would take a really big cow to give enough milk to fill that glass in tidbit 3).

5) Tomatoes and serrano chiles are not vegetables. They are fruits. So is a banana.

6) “Sometimes a banana is just a banana.” – Sigmund Freud. Freud would have been greatly interested in a dream about a twenty-million-pound serrano chile.

7) Oh, and some historians think Christopher Columbus crossed the Atlantic Ocean to get away from lutefisk.