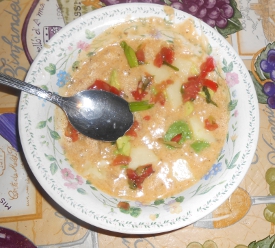 Add potato cubes to pot. Stir until spices coat potato cubes. Sauté for 5 minutes on medium-high heat. Add water, chicken broth, achiote, cilantro, cumin, and salt. Simmer soup on low heat for 20 minutes or until potatoes are tender. Mash the potatoes in pot with potato masher until only small bits remain. Soup should be creamy. Stir occasionally. (No turning back, you’re almost there. Excelsior!)

Lavishly praise anyone who went to the store to get you all these ingredients. Serve and enjoy.

1) Since 2001 the official currency in Ecuador has been the U.S dollar.

3) The Ecuadorean flag is yellow for the nation’s diversity, blue for the sky and the sea, and red for the blood of those who fought in the war for independence.

4) There should be a Vulcan flag. Here goes. The Vulcan flag is yellow for the planet’s diversity, red for the sky, turquoise for the sea, and green for the blood of those who fought in the Federation’s Wars.

5) Ecuador was the first nation in 2008 to declare constitutional rights for nature. The Vulcan embassy is mute on this point despite numerous requests.

6) Wouldn’t it be way cool to have a contest to see who could visit the most embassies in Washington, DC? You’d have to get your contest book stamped by the embassy or pick up literature from the country about agriculture or something.

Posted on August 1, 2012 by pauldelancey

Add chicken breast, cornstarch, soy sauce, salt, and white pepper. Cook for about 3 minutes on medium or until chicken bits have all changed color. Remove veggie-chicken mixture from frying pan and set aside.

Beat eggs. (This should be easy as your grasp of mixed-martial arts exceeds that of the genial egg.) Spray pan with no-stick spray. Heat peanut oil on medium. Add 2 eggs and cook on medium until eggs begin to set. Flip over egg patty. (You might want to use two spatulas. I wonder if any chefs use crossed spatulas as their coats of arms.) Or could use a spatula to cut the big patty into four manageable patties each time you add a layer of eggs.

Add about 1/3 of the veggie-chicken mix to the top of the patty. Add 2 more eggs and cook on medium until eggs on top begin to set. Flip over the whole patty. You should now have 2 layers of eggs and one mix. Repeat this step 2 more times until you have 4 layers of eggs and 3 of the mix. Watch the egg layer each time you flip the whole patty. Be careful that they don’t burn. Lower the heat, if at any time, the egg layer browns.

Remove the patty, or patties, from the pan and set on serving plate.

Put soy sauce, dry sherry, and water in frying pan. Bring to boil then immediately turn off heat. Add cornstarch and mix until sauce thickens. The sauce add flavor, texture, and enhances the appearance of this entree.

(This is especially true if you went the “one big patty” route and it fell apart during cooking. Refrain from cussing in Swahili. Simply cover the broken patty completely with sauce. Nobody will ever know there’s a break in the patty after you’ve divided the patty into two, three, or four pieces.)

1) Untying knots becomes easier when you sprinkle it with cornstarch.

2) While Alexander the Great was busy conquering the Persian empire he came across a two ropes tied together at Gordian. A prophet told him if could separate the ropes he would win many victories. People pooh poohed the idea that anyone could untie the intricate knot, but Alexander simply slashed the knot into two with one mighty sweep of his sword. To this day, the Gordian knot is a metaphor for not having cornstarch on ones person.

3) Alexander did indeed conquer quite a few exotic lands, even unto India. But he never quite reached China.

4) So, the Great one never got to taste egg foo young.

5) Did China have egg foo young in the time of Alexander the Great, some 2,300 years ago? Would he have like it?

6) We just don’t know. There just weren’t any many alternative military cuisinal historians around.