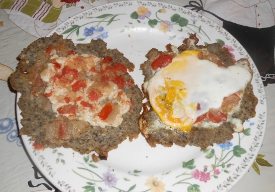 Add rice flour, lentil paste, and salt to large mixing bowl. Mix with hands until you get a cake-like batter. Gradually add about 1 cup water until you get the right consistency. Add ghee to pan. Melt ghee using medium heat. Add 3 tablespoons ghee to the pan for the first chatamari and then add more later as necessary. Add ⅓ cup batter. Make base by spreading batter evenly and thinly with spatula until it’s 8″ in diameter. Cover base with equal amounts of minced chicken and sautéed garlicc/onion. Cook using medium heat for 3-to-5 minutes or until chicken/garlic/onion.is done. Chicken should be completely white. Cooking times tend to go down for each chatamari.

1) There is no I in team or Nepal, but there is an I in victory and Nepali.

2) Nepali is an anagram for Alpine, which is cool. The Alps and Nepal are also cool from their tall mountains.

3) There is a lot of Snow, gratuitously capitalized, in the Alps and in Nepal.

4) Snow is an anagram for swon.

5) The plural form of swon is also swon, just like the plural of moose is moose.

6) The swon is the natural enemy of the moose.

7) The exciting swon festival is held every year or so in Crebano, Ruritania. Come early to see to the exploding cabbage competition.

8) If you are having trouble finding Ruritania on your map, may I suggest heading to Nepal for Holi, or the Festival of Colors, to celebrate the end of winter. However, it’s held in March and you’ll be in the Himalayan Mountains. It’s kinda like going to Wisconsin for your spring break. However, you do get paint yourself with various dyes. Again, like going to Madison, Wisconsin to see the Badgers play football. The one true difference between Nepal and Wisconsin is that the Nepali like to eat chatamari while the Wisconsinites prefer to munch on bratwursts. Your call.

9) If you happen to be Asia a month earlier, you might wish to see the Naked Man Festival in Japan. The best one is reportedly held in Okayama, although how they decided this is difficult to measure. The men, clad only in loincloths race toward Saldaji Temple to collect lucky sticks. I can just see a naked man saying, “Honestly officer, I’m not fleeing an enraged husband. I’m participating in the Naked Man Festival.” The officer will roll his eyes. “Like I haven’t heard that one before.”

10) After participating in the Naked Man Festival in Japan and having gotten drunk for two months, missed your flight home, and having your wallet and ID stolen, why not take in the Penis Festival held the first Sunday of April? People head to the Kanayama shrine to see giant penises, made, I hope, from paper maché or wood. Appreciate the many penis drawings and costumes.

11) Lovers or bamboo and buns will not want to miss the Cheng Chau Ben Festival held every May in Hong Kong. Contestants climb a giant bamboo covered in Chinese steamed buns. Um, okay, it’s not entirely clear whether the tower is covered in Chinese steamed buns or the climbers are covered in them. Either way, it’s pretty darn exciting. Anway, buns picked from the top of the bamboo tower or taken on the backs of the contestants to the top are consider luckier than ones at the bottom. People there go vegetarian during this festival. It’s not clear why. Maybe I would too if I had to climb a tall tower with steamed buns all over me.

13) Meat lovers will want to savor the Pig Parade held in Malolos, Philippines in mid September. Watch pigs dressed in all sorts of costumes and wearing makeup. See if you agree with the judges’ decision of the best dressed pig. But win or lose, it doesn’t matter in this egalitarian contest as winners and losers alike get roasted for the magnificent feast.