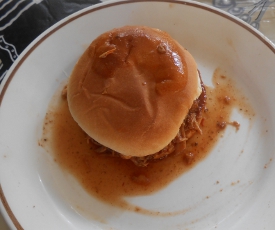 Dice garlic cloves and onion. Rub chili powder, pepper, and salt onto pork. Add garlic, onion, pork, liquid smoke, and 1 can root beer in a crock pot. Cover and cook on low for 6-to-8 hours or until pork shreds easily. (If after 6 hours the pork is not close to being tender or able to be shredded, turn up the heat one notch.)

Remove the pork. (Save the liquid, garlic, and onion for later. It makes a good soup.) Let pork cool. Shred pork with fork. Add shredded pork, barbecue sauce and one car root beer to crock pot Cover and cook on low for 1 hour. Serve on hamburger buns.

1) August 6 is the anniversary of the day the atomic bomb was dropped on Japan. However, this date is also National Root Beer Float Day! Atomic warfare is surely a downer,  but nothing’s better than a root beer float. Indeed the life-giving, life-soothing properties of root-beer floats have helped us all deal with the legacy of the atomic bomb, have prevented future atomic warfare forever

2. In August, 1893, Frank J. Wisner, was drinking root beer during a full-moon night. The full moon inspired Mr. Wisner to add a scoop of vanilla ice cream to root beer. The ice cream floated! He had invented the root beer float. We have been living in The Golden Age of Humanity ever since.