Posted on October 5, 2021 by pauldelancey 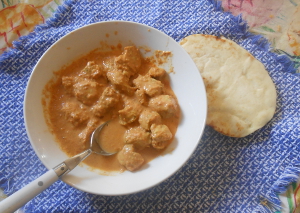 Add marinated chicken and vegetable oil to pan. Sauté at medium-high for 10 minutes or until the chicken cubes brown on all sides. Remove chicken and set aside. Mince 3 garlic cloves and onion. Grate ginger root. Add 1 tablespoon butter, garlic, and onion to pan. Sauté for 5 minutes at medium-high heat or until garlic and onion soften. Stir frequently. Add ginger. Reduce heat to medium. Sauté for 1 minute or until fragrant. Stir frequently.

Add puree back to pan. Add cream and chicken cubes. Simmer on low heat for 12 minutes or until chicken is no longer pink inside. Stir occasionally. Serve with naan bread.

1) In 1948, Stalin, the brutal dictator of the Soviet Union decided to force the Western Allies out of Berlin by blockading all rail and road access to the city. He figured that the Allied armed forces and Berlin’s citizens would give up in weeks as they’d have to leave to eat. Then the Soviets could take Berlin without fighting.

2) But by agreement, the Western Allies had access to Berlin via three air corridors. The American and British, by herculean efforts, air lifted millions upon millions of tons of coal to the city. They did the same for foodstuffs, flying in untold tons of: flour, fat, meat, fish, dried potatoes, sugar, powdered milk, yeast dried veggies, salt, and cheese.

5) But there was no room on the air transports to bring in butter.

6) So Truman in conjunction with German chicken farmers organized the Butter Chicken Brigade, Butterhühnerbrigade in German. They really do have a word for everything.

7) The German chicken handlers loaded their chickens with panniers brimming with tubs of butter. The Soviet soldiers surrounding Berlin couldn’t stop the chickens from running the blockade. Have you ever did to catch a chicken? It isn’t easy.

8) Anyway, Berliners, their resolve stiffened by the now possible cookies, united against the Russians. The Russians knew they could face them down. Soon afterward, Stalin lifted the blockade. The Butter Chickens of Berlin had preserved their city. Indeed, they’d saved the world.

9) Said to say, their only recognition came, strangely, enough from India which developed this dish in honor of the Berlin’s plucky chickens.

Posted on August 1, 2016 by pauldelancey 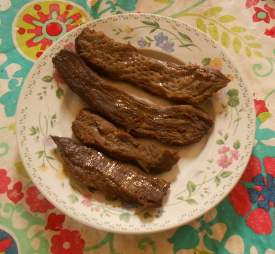 Slice beef across the grain into strips ¼” thick. Add all other ingredients to large mixing bowl. Mix ingredients with whisk until well blended and brown sugar dissolves completely. Add beef strips to bowl. Mix by hand until strips are well coated. Cover bowl or put in large, sealable plastic, bag. Place in refrigerator for 8-to-12 hours. Stir at least once.

Preheat oven to 160 degrees. Remove meat from marinade and pat dry with paper towels. Put wire rack on top of baking sheet. Place marinated strips on top of wire rack. Do not let strips touch each other. Bake at 160 degrees for 5-to-7 hours or until strips are ready. Strips will be ready when jerky is dry enough to easily tear off a piece, yet will not snap when bent. Preserve jerky strips from air and humidity by storing them in mason jars or sealable plastic bags.

1) Origami flourished in Texas during the dark, final months of the Confederacy. The Union blockade ships had deprived the state of all sorts of fun things: fine linen, playing cards, refrigerators*, baseball bats, anything that reeked of fun. All they had left was paper. Which was used for spitwads and even sent to the front lines, where they proved utterly useless in thwarting the bluecoat advance. Soon however, the thriving art colony of Tyler, Texas experimented with making animals out of paper. The Texas Art of Origami was born. Drovers, far from sources of paper, turned to making thin strips of cooked beef for their origami material. And so, beef jerky was born.

2) *Culinary historians are at a loss to explain these apparent artifacts in the Texas of 1865.