* = This dish is meant for a large gathering. Feel free to cut all ingredients in two or in three.

3) This roundness explains the popularity of tomato bowling at amusement parks.

4) That and the fact that tomatoes go splat when they speed into the wooden bowling pins.

7) Do tomatoes relish being diced, minced, and pureed for culinary purposes?

9) That is why they are trying to become more buff.

10) To the right is a tomato trying to build up its arm muscles by doing handstands.

11) This, of course, a fruitless endeavor. Tomatoes cannot do handstands. They do not have hands.

12) Nor even arms. Then how did it flip itself upside down? I have no idea, but let us applaud the effort.

13) It’s worth mentioning that tomatoes are quite territorial. This is why you don’t see other plants, bushes, or trees growing near tomatoes plants. The tomatoes don’t tolerate any intruders. They simply squash all comers.

14) Indeed, all kinds of produce are quite clannish and practice segregation. This is why you find only tomatoes with tomatoes, only bananas with bananas, and so on.

15) Yes, tomatoes remain discontented with their existence on Earth, just getting eaten and rubbing elbows with dirty potatoes and the like.

16) Which is why they want to leave Earth 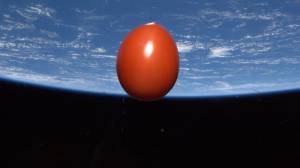 and find a new home on Mars, the Red Planet. Scientists pooh poohed this idea, ascribing the tomatoes’ goal as just idle talk.

17) Then one year ago to this very day that you’re reading this tidbt, the tomatoes mustered hitherto unsuspected resources and launched one of their kind into space. The photo to the right proves they succeeded.