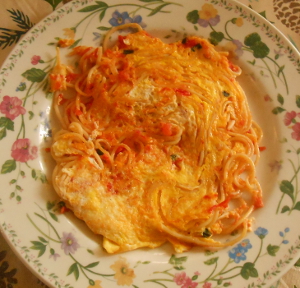 Isn’t the very idea of a spaghetti omelette way cool?

1) China invented spaghetti. They built Great Spaghetti Wall of China in 1155 to keep out the Mongol barbarians. It worked. The wall was too high to scale, too thick to batter through.

2) However, in the summer of 1213, Mongols under Genghis Khan approached the wall. Khan’s engineers studied and studied their obstacle. No use. The frustrated warriors threw tomatoes, one of their more non-lethal weapons, at the wall before turning away to head home. Suddenly hot rain, it was summer, deluged and penetrated the Great Spaghetti Wall for ten minutes. The pasta softened. So did the tomatoes. The Mongol horde, tired of endless yogurt meals, attacked the wall with two-tined forks. The cooked spaghetti was great. and so they ate their way through the wall. The Mongols poured into China and devastated the land.

3) The French built the Maginot Line in the 1930s to keep out the spaghetti-hating German army. Unfortunately, the French didn’t have enough pasta to build a wall along their entire northern border. The Germans, in 1940, simply sent their forces around the wall and defeated France. No nation has tried building a spaghetti wall since.