Posted on January 8, 2017 by pauldelancey 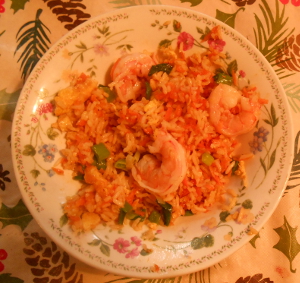 1) The children’s game, CandylandTM, was invented way back when in prehistoric times by Philippe and Miriam Davout. The Davouts were devoted parents and persistent entrepreneurs. Hence, the saying that’s been passed down through the millennia, “As loving as a Davout hug. As novel as Davout fire.” Another stone-age adage that we know is, “As ugh as Ogg’s mastodon mignon.” But Chef Ogg deserves his own tidbit series after a recipe and so we return to the Davouts.

2) Anyway, little Yvette Davout didn’t have much to do. She had no school to go to. And what would the teacher have taught her? “Stay inside your cave. The pumas lurking outside will eat you.” That’s it. Her parents taught her. No need for school.

3) This attitude persists to this day. However, the truth be told, not many people nowadays do not get eaten, or even seriously challenged, by pumas. So, this view is kinda hard to challenge.

4) Meanwhile back at the cave, Yvette fussed and fussed. She couldn’t go out to see the Murat sisters. And after, their daughter Lucy got eaten by pumas, Daddy and Mommy Murat wouldn’t let their remaining girls visit Yvette anymore.

5) It got hot during Olduvai Gorge summers, particularly in a cave. Sweat rolled down Yvette’s sloped forehead like Eddie the Eagle doing a ski jump. She needed a distraction before she went stir crazy and ran outside to eaten by pumas.

6) Then one glorious noon, a thought, the first of the day, popped into Miriam’s head. She explained it to Philippe. He smiled. “Yo ho, Miram, that a’s glorious idea, wife.” They chattered excitedly about rules, then stopped abruptly. Miriam slapped her head with a rock. It didn’t hurt, her skull was thick. Cave folk did this all the time.

7) Miriam, having waited for the author’s intrusion to stop said, “Boo hoo, we don’t have the requisite technology to fabricate the many colors needed to paint this game’s playing cards.”

8) That was quite a complex statement for the time. Philippe, having neither a dictionary nor even a ThesaurusTM, had to guess at its meaning. Then he too smashed something to his head. It was a large chunk of obsidian. It splintered into nice sharp dice-like cubes.

9) The Davouts looked at each other. Light bulbs, at once a metaphor and an artifact, lit up above their heads. “Let’s make dice–the first use of this word–out of these, these DICE,” said Philippe and they did. They finished the game lickety split.

10) Little Yvette loved the game. She played it and played it until the sharp edges of the obsidian dice sliced off too many of her fingers. Distraught and bored, she took up painting. It was tough painting with two fingers on her hand, hence the crudely shaped hunters and mastodons we see depicted in the Lascaux caves.

11) Yvette eventually gave her dice to her own daughter, Sabine. Sabine too was forbidden to go outside the cave or to play bloody Candyland. She took to cooking instead. Being smart like all dawn-of-humanity Davouts, Sabine took to chopping onions with her Candyland dice. She called this technique dicing and so do we. There you go. 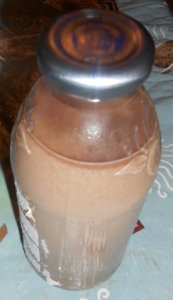 glass jars with lids if you wish to save the coffee. This coffee will keep about as long as milk does.

1) I would have written the tidbits for this recipe earlier but for my worries about plate tectonics.

2) I mean what if the Earth’s plates shifted to such an extent that my computer ended up fifty miles from my bed. That would be quite a walk in my pajamas to finish a recipe.

3) And what if the resultant earthquake from some monumental shift of the Earth’s surface created a deep crevice between me and my computer? What if there were pumas in the crevice?

4) But with any luck the earthquake that created the puma-filled crevice in my office would destroy the pumas with debris from the ceiling.

5) Of course, this is not an entirely realistic fear. My fair town of Poway is in the middle of a giant surface plate. My bedroom, my office, and indeed the rest of the house would shift the same amount and in the same direction as the rest of the region. It would indeed be like catching a wave and sitting on top of the world, except that the speed of plate surfing is maybe an inch a year. Geo tubular, man.