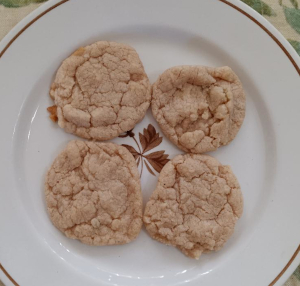 Cover baking sheets with parchment paper. Take cookie dough and roll it into a 36 1″ balls. Place cookie-dough balls 1″ apart on parchment paper. Flatten dough balls slightly with hand. Bake at 350 degrees for 14 minutes or until cookie edges turn golden brown. Cool on racks for 20 minutes or as long as you can wait.

1) Historians call the fixed defensive system along the borders of the Roman Empire, “limes.”. Why did the Roman Empire need to defend itself so vigorously? Because the barbarian hordes lurking outside the Roman world wanted the plunder the Romans’ limes. Why did the barbarians yearn so for limes? For its vitamin C, of course. Also, it impossible to make Lime Cookies without limes. Everybody loves lime cookies, whether civilized or barbarians and the Romans prized their Lime Cookies, even to the death. Hence, the “limes” defensive system. Can you blame them?