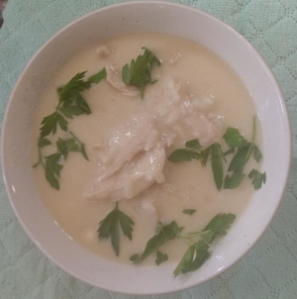 While chicken simmers for 20 minutes, add eggs and lemon juice to mixing bowl. Mix with whisk or fork until well blended. Take 2 cups chicken stock from large pot and add to measuring cup. Drizzle chicken stock from measuring cup to mixing bowl. Whisk continually as you drizzle in the stock. Add this egg/lemon/stock sauce to the large pot. Add pepper and salt. Simmer for 15 minutes or until soup thickens. Stir enough to prevent burning.

1) Wolves like to eat chickens. Isaac Newton’s chickens were the best. So, it’s no surprise that numerous gangs of unemployed, teenage wolves attacked his chicken coops night after night. Newton first reasoned with the wolves, but his “Now, see here” was met with scorn. He even tried making scary faces. The wolves yawned briefly, then continued their attacks.

2) Desperate, Newton climbed his lemon trees and threw lemon after lemon at the wolves until he had no more. “Deuced wolves, take that.” And the wolves couldn’t take that barrage. They scurried away. Wolves have feared lemons ever since. This is why most chicken ranchers surround their coops with lemon trees. Eventually, culinarily minded lemon tree/chicken ranchers made this dish.

3)Anyway, Newton saved his chickens, but the loss of his lemons ruined him financially. He turned his mind to scientific observation and mathematical theory. Which is why we’ve heard of him.