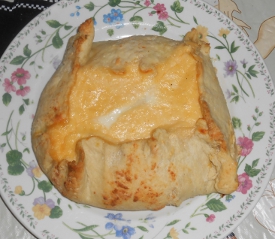 After dough has risen, dust flat surface with 1 tablespoon flour. Add dough ball to flat surface. Flatten dough ball with hands. Divide dough ball in half. Flatten dough halves until they are 11″ wide and about ⅛” thick. Add parchment paper or no-stick spray to pie tins. Add flattened dough halves to pie tins. Add half of cheese/egg/flour mixture to center of each dough half. Pull edges of dough to the center until there is only a round 1″ hole in the middle. Pinch edges together.

Bake for 15 minutes at 375 degrees or until bread loaves are starting to brown. Use spoon or shot glass to press a 3″ hole in the center of the loaves. Add an egg to each 3″ hole. Bake at 375 for 15 minutes or until loaves turn golden brown and eggs are slightly set. (The eggs will continue to cook after being removed from the oven.) Remove from oven and brush each loaf with 1 tablespoon butter.

Serve hot to adoring guests. Put pairs of unappreciative guests in pairs of matched socks. Put sock-clad guests in clothes drier. When one of the matching socks disappears, as often happens, it’ll take one of the complainers with it. Repeat until your home has only happy people in it.

1) This entree is from the country called Georgia. This Georgia is near Russia and Iran. There is also a state in America called Georgia. It is near Florida, Alabama, Tennessee, and South Carolina.

2) Both Georgias are named after Madamoiselle Georgia Chat. We know little about Mlle. Mousse save that she was born in Tours, France about 708. She was also extraordinarily beautiful. Okay, we know that. Oh, she was also fabulously rich. All right, we know that as well. So, you’d think she’d be a hot marriage prospect for all the local barons. Why did she never marry?

3) Mademoiselle Georgia never considered giving up her independence and she had a giant, pet rabbit Snuggles to protect her. How gigantic? Sources yield varying heights from twelve feet tall to the preposterous sixty-seven feet. Given the fact that Snuggles was also a ninja, you can see why the local nobility thought twice before courting her. On it went. Georgia performed scientific experiments. She even invented the briquette for barbecuing while Snuggles swung his one-ton hammer. at local lords and door-to-door salesmen.

4) Then in 732, Abd Al-Raman with his Berber tribesmen invaded the Frankish kingdom. The Franks assembled their forces at Tours under Charles the Pippinid. The Muslim Berbers were famed for their cavalry. The Franks had the fiercest infantry in all of Europe. Unfortunately, the Franks at the time were notorious for their allergy to horses.

5) The Muslims should have won. Europe should now be eating koushry instead of croissants. What happened? Snuggles happened. He shoved his way past the sneezing Frankish infantry and swung his mighty hammer over and over again at the massed Berber cavalry. Soon, the overmatched Berbers fled, but not before one of them shot an arrow through Snuggles’ heart.

6) Two bards saw the battle and would travel the world singing Snuggles’ praises. One settled in America, the other near Russia. Locals impressed by Snuggle’s deeds wanted to renamed their lands after him, but balked at his cutesy name. They settled on Georgia instead and there you have it.