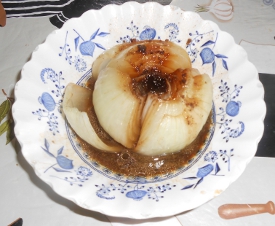 Makes 1 onion. Takes 1 hour 10 minutes. If you wish to serve everyone in the world, multiply ingredients by 7,000,000,000. You will need a big oven and most likely will want some help.

Place a pat or slivers of butter equal to 1 teaspoon into each of the three cuts on the sides of the onion. Add bouillon cube and sherry in the onion’s cone-shaped hole. Wrap tightly in foil. Bake at 350 degrees for 1 hour or until onion is tender. Place tray underneath to catch drippings. Open foil slowly to let hot steam escape. Serve in a bowl as there will be broth.

1) N.B. Ull was just one of thousands of wildcat oil men looking for oil in Hawaii in the 1880s. Why were oil men looking for oil in Hawaii? The weather, of course, it’s great there. And the sunsets and those drinks with the pink umbrellas and the hula dancers swaying back and forth and . . . Anyway, the oil men drilled and drilled and eventually gave up to go back to the beaches to watch the sunsets and swaying native dancers and . . . Anyway, Mr. Ull persevered month after month and Pow! A black, plume spurted into the sky. Only it wasn’t oil. It was something culinary..

2) Anagrammists rushed to the spot and rearranged N.B. Ull and Oil to form the anagram Bouillon. Unfortunately, whenever anagrammists gather in great numbers they get agitated, especially when there are no drinks with pink umbrellas in them because failed oil men have drunk them all. In this case, the excited wordsters fomented revolution against the Hawaiian Monarchy. Businessmen, fearing anarchy, successfully petitioned the U.S. to annex these idyllic islands. Something to think about whenever you enjoy bouillon or rearrange a word’s letters.