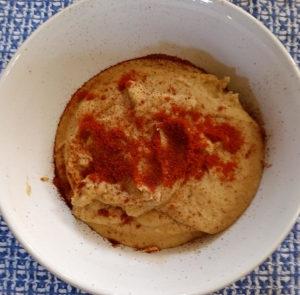 Serves 2. Takes 1 hour 50 minutes plus soaking for 10 hours or overnight.

1) Doesn’t that look like an eye? The Urberqian hominids of modern-day Morocco thought so. Not only that they, along with the entire prehistoric world, believed that anything that looked like an eye but wasn’t, would steal your spirit. No one wants that. So, the Urbeqians wouldn’t eat soup. Then Abim, a really clever hominid, noted that getting cayenne in your eyes blinded you for a bit. So, sprinkling cayenne on soup would blind evil spirits dwelling in soups. Early people could now eat soup. Early people now had energy to explore the world. The Urbeqians did just that, 10 years before Lucy led her clan of Olduvai Gorge. We don’t know about the Urberqians achievement because, you know, prehistory. But this is why we garnish soups with cayenne pepper, and pepper.