Posted on November 2, 2021 by pauldelancey 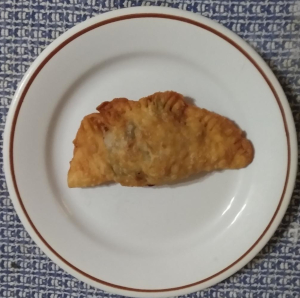 Add ¼ cup vegetable oil to pan. Heat using medium-high heat until a little bit of flour dances in the oil. Add 2 tablespoons flour. Reduce heat to meat and cook for 1 minute or until flour starts to brown. Add ¼ cup water. Still with whisk or fork until well blended. Add back spinach. Stir until well blended. Remove from heat.

Add 3¼ cups flour, 1 cup warm water, and ¼ cup oil to 3rd, large mixing bowl. Mix with hands until you get a smooth dough ball that is not sticky. Add a bit more flour if necessary. Cover and set aside.

Spray flat surface with no-stick spray. Divide dough into 16 smaller dough balls. Roll out small dough balls until they become rounds ⅛” thick. (The rounds should be about 6″ across.) Divide meat filling equally over on the right half of the rounds. Distribute the spinach filling equally over the sides with meat. Leave a small uncovered edge on all the round.

Brush the edges with little bit of water. This will help the pastries to seal better. Fold uncovered half of the dough rounds over the covered side to make your gutap pastries. Seal the edges together by pressing down with the tines of a fork. Prick top of gutap with fork. This allows hot air to escape while cooking. (It also helps for even browning of both sides.)

Add 3½ cups oil to large pot. Heat oil at medium heat until a little bit of dough in the oil starts to dance. Carefully add 2 or 3 gutaps to pot. (Do not let them touch It also helps the flip side brown evenly.) Fry 3 minutes on each side or until gutaps turn golden brown all over. Add more oil as needed. Remove with slotted spoon and drain on paper towels. Serve hot.

1) The Sun and the Moon are round. The Ancient Romans worshiped them as gods. Pizzas are round. Pizzas are made round to honor the Sun god, Sol, and the Moon goddess, Luna. Why did the Romans honor these gods with pizzas? Because Sol and Luna loved pizzas. Who doesn’t?

2) Sol wanted the heavens to himself during the day. This is how we get the modern word, solo.

3) Luna would go insane when the Earth hid her beloved Sun. Her face sported a tic during these events. Her followers would worship her during lunar eclipse by scrunching their faces to resemble tics. This is how we get the word, lunatic.

4) The supreme Roman god, Jove, certainly played the field. He took the form of a dove and made passionate love to a Gallic lass called Carla La Fong. You’d think Carl would taken a man for a lover rather than a dove, but there’s no accounting for taste.

5) Carla named the fruit of this union, Gutap. Gutap was a handsome and muscular lad. Indeed, he killed the requisite number of wild beast expected of a demigod, but his passion was making meat pastries. He didn’t even half to follow the recipe above. He just pressed dirt between his hands and presto, he’d made a semicircular pastry. Jove’s fellow Olympian loved these pastries, calling them gutaps after Juno’ son. Indeed, they found them so tasty, that they esteemed Gutap above, Juno, head goddess and wife of Juno.

6) This adulation pierced Juno’s vanity so much that she cast Gutap down to Earth. Gutap fled Juno’s wrath until he reached Turkmenistan, a land so far away that even the gods could not see it. The demigod fed his meat pastries to his new neighbors. They loved the pastries so much that they found a way to make their own gutaps. Now you know.