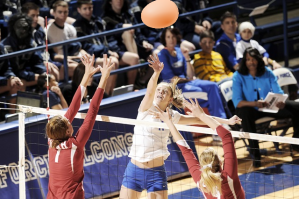 Egg volleyball burst upon the collegiate scene this August and is taking our universities by storm. Listen to what the egg-volleyball luminaries are saying.

“We’re all scrambling to find the find the best athletes,” said Eunice Oeuf, Women’s Athletic Director for the University of Wisconsin.

“High-school athletes know there’s a high demand for their talents,” said Coach Ben “Data Base” Yumurta of the Cal Tech Beavers. “The big schools eat up most of the hot prospects. We get all sorts of rejections. You really need a hard shell to make it in this coaching job.”

“We poached an egg-volleyballer who had committed to Stanford,” said college recruiter Joe Eieren of the UCLA Bruins. “Now, we’ll whip them.”

“We’re forming men’s and women’s volleyball teams,” said Executive Chef Sue Vide of the Culinary Institute of America,” Our students already know how their way around eggs and have the necessary supple wrists for egg volleyball. We expect to leave our opponents with egg on their faces.”

“Other teams will crack under pressure when they face us,” boasted Yoko Arrautzak of the Duke Blue Devilled Eggs. “They might even run.”

Yancy Atody, hard-boiled coach of the Tennessee Lady Volunteers, scoffed at this claim. “We’ll make omelettes out of them.”

“Ha,” retorted Coach Arrautzak, “They don’t have the eggs to beat us.”

Albert “Al” Bumen, spokesman for the American Poultry Council can’t stop smiling. “We’re so pleased that the universities are finally taking this support seriously. We’ve been tossing this idea to them for decades.