Posted on September 23, 2021 by pauldelancey 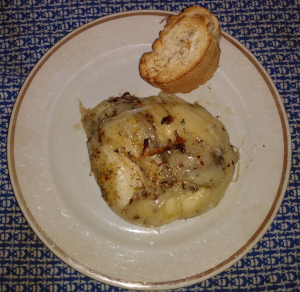 Dry cheese out on a rack for 5 hours. This helps the cheese keep its shape when grilled.

1) The Mormons first settled Utah in 1847. Mormon leaders soon realized that their colony needed many more settlers to survive. The word went out from Utah for Mormons in the U.S. and around the globe to make their way to this new dessert sanctuary. Indeed, many Mississippian Mormons mounted covered wagons and headed west. But the original message became more and more corrupted the farther it went. By the time it reached Leta, Argentina, the decree simply said, “More men.” So lusty, Argentinian cheese making men headed to Provo, Utah thinking the message meant Utah had too many unwed señoritas. The cheese makers liked what they saw in Provo and decided to stay. They made a new cheese which they called Provoleta to honor their new and old homes.