Corn On The Cob

CORN ON THE COB 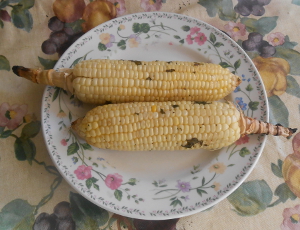 Dice basil. Add all ingredients save corn to mixing bowl. Mix with whisk until well blended. Peel back corn husks most of the way and remove corn silk. Brush corn with buttery blend. Close husks over ears. Tightly wrap corn in aluminum foil. Preheat outdoor grill to medium-high heat. Place foil-wrapped corn on grill. Grill for 20 minutes or corn is tender to the fork. Remove corn and place on plate. Let sit for 5 minutes or until cool enough to handle. Remove husks.

1) Since the dawn of time, people have been trying to hurt each other. At first, combatants made scary faces. However, all cavemen had scary faces and all fights ended in draws. Then Ogg, an intellectual giant for his time, dislodged the bugs in his hair and let a stiff wind carry the little critters onto his opponents’ face. Exactly, 1,217 years later Ogg LXII found if he lifted up his arms, the wind would waft the ripe odor from his armpits toward his foes, knocking them out instantly.

2) However, this Oggian technique relied rather heavily upon getting the wind at one’s back. However, this secret would soon be discovered by all cavemen a scant two millennia later. Cavemen would dance around each other trying to get the wind advantage. Indeed, Ogga, Ogg CXI’s wife, found herself grabbing Ogg and whirling around, trying to get the upper hand. But then, she found this close-quarter dancing with her husband to be great fun. It caught on with all cave couples. The waltz, and all other forms of dancing, had been invented.

3) Three millennia later, Ogg CCCXXXIII, discovered how to grow corn. This act revolutionized warfare. The corn cob, with its hard kernels, delivered a vicious migraine, extended the attacker’s reach, and most of all, eliminated the role of wind in combat. Migraine battles proliferated. Then, in the Bronze Age, Ogg DCIV figured out how to make swords. The mighty corn cob lost its position on the battlefield, but not in our meals. We eat corn cobs to this day. There you go.