Posted on September 28, 2017 by pauldelancey 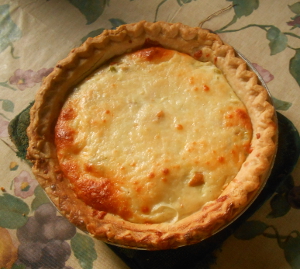 Preheat oven to 425 degrees. Use mandoline or knife to slice onions ⅛” thick. Seed and dice chiles. Add butter, onion slices, and chile to pan. Sauté on medium-heat for 5 minutes or until onion softens. Add onion and chile and their drippings, eggs, flour, milk, sour cream, pepper, and salt to large mixing bowl. Blend well with whisk. Pour into pie shells. Sprinkle pies with cheese. Bake in oven at 425 degrees for 15 minutes. Lower temperature to 325 degrees and bake for an additional 20 minutes or until center of pies are firm.

1) Cro Magnon chefs felt unfulfilled serving the same old berries year after year. One day a caveman chef pointed to a mastodon. “Why not eat that?” he asked. “Yes, let’s,” said his tribe. So, the Twofoot Tribe organized mastodon hunts which became more successful when they attacked with rocks instead of berries. And the tribe would dine on raw mastodon chunks.

2) A century later, an enfant terrible chef pointed to some chickens. “Why not eat those?” “Yes, let’s,” said the Hatch Valley clan. And the cavemen started to herd chickens.  Later, through a series of fortuitous accidents, the H.V. Clan invented pie crusts. It was a natural step to get their chickens to lay eggs into the pie crusts, add a few Hatch chiles, onions, and sour cream from sour cows. Then cook the pie over an open flame, thank goodness for the invention of fire. And so Hatch Chile Onion Pies were first made. You can see finger paintings of them in the famous Lascaux Caves.