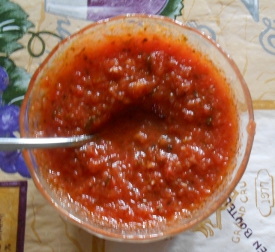 1) It’s helpful to know whenever you’re at an anagram convention that pasta sauce is an anagram for: cause a spat, a cat’s pause, sautes a cap, and cue ass pat.

2) A pat is a small slice of butter. A stick of butter is much longer than a pat.

3) When German soldiers invaded the Netherlands in 1940, they confiscated the locals’ butter. Culinary historians suspect the main impetus behind Germany’s patently unpleasant wars of aggression was a massive butter shortage in the Fatherland. The Netherlands has ample stocks of butter, so it was overrun by its larger bread-spread lacking neighbor to the east.

4) Sure, Germany invaded other nations as well, but that was mainly from inertia. Once you start invading other countries, it’s kinda hard to stop. Besides, Belgium had fries, France had cheese and baguettes, and Russia had beef stroganoff.