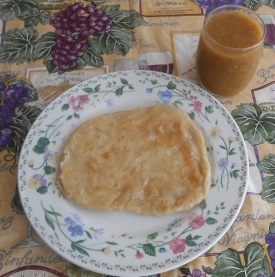 Combine 2 cups flour, baking powder, salt, and water in mixing bowl. The amount of water added should be enough to make a fairly firm dough, so a bit more or less water maybe needed.

Sprinkle plate or board with flour. Divide dough into six lumps. Put a lump on board. Dust rolling pin with flour. Roll out dough until it is a circle 8″ across . Put 1 teaspoon on dough. Smooth the oil so it covers the entire circle. Sprinkle 1/2 teaspoon flour uniformly over dough or roti. Fold in corners of roti. Shape roti into a ball. Keep board and rolling pin dusted with flour as you repeat this process for 5 move rotis.

Let rotis stand for 30 minutes while you straighten out the world or sip on a nice, cold Roy Rogers soda.

Set heat on electric skillet to 350 degrees. Put 2 tablespoons oil in skillet. Flatten a roti by hand and put it in skillet. Cook the flatbread, roti, for 3 minutes or until both sides are starting to turn light brown. Turn roti over frequently, at least once every 20-to-30 seconds. Repeat for the other 5 rotis. Add enough oil to the skillet to maintain 2 tablespoons for each roti.

4) Round in the morning, round at night.

7) And now in a seamless transition to more complex sentences, most people in 1492 thought the Earth to be round.

8) The flat-earth myth became popular with the1828 publication, Washington Irving’s imaginative, A History of the Life and Voyages of Christopher Columbus.

9) Hundreds of thousands of American school kids have written essays about Christopher Columbus that have been wrong. All because of Washington Irving.

10) Someone should go back in time and send Mr. Irving to the principal’s office.

11) It’s a good thing, though, the world is not flat. What if you were playing soccer and someone kicked the soccer ball over the edge of the Earth and the soccer ball was gone for ever and no one had another soccer ball?