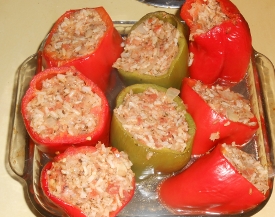 Many people are more allergic to pine nuts than other types. Substitutes for pine nuts are: walnuts, almonds, pistachios, cashews, and peanuts.

Put olive oil and onion in frying pan. Sauté for about 5 minutes or until onions soften. Stir frequently.

Discard bell-pepper tops before serving this entree to adoring family or guests.

2) I guess some people have different ideas about fun.

3) The Turks introduced coffee to Europe during some three-hundred years of invasion. Bad for the Europeans of that time, but really good for us now when we need to wake up.

4) The mighty croissant was invented in Vienna in 1683. Viennese bakers preparing breads and pastries in the wee hours in the morning heard the Turks tunneling under the city. The bakers sounded the alarm. The alerted Viennese defenders defeated the tunnelers and the city was saved. The bakers celebrated the event with pastries shaped like the crescent on the Turkish flags, hence the name croissant.

6) The Turks haven’t invaded anyone for about three centuries bringing that mode of culinary enlightenment to an end.

7) We now discover Turkish culinary recipes at bookstores and from the internet.