Posted on August 4, 2012 by pauldelancey 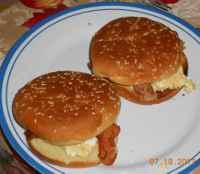 Fry bacon in pan at medium-to-high temperatures. Stir with pan tilted away from you to avoid hot-grease splattering on you. Wear an apron. (Or a Naval Constellation Class defense shield if you can find and afford this item.)

After grease starts to form on sauce pan, add the cumin and beef allocated for the bacon. Stir frequently to avoid burning. Stop when bacon is done to the desired level of crispiness.

Remove the bacon, preferably using a spoon with holes in it. Place in a bowl with a paper towel already in it so as to absorb grease. Tamp down on top with another towel to absorb even more.

In my house, my nine-year-old sous chef does all the scrambled eggs. (Oh geez, now he’s ten. Hurry, Paul, get this cookbook out, it’s aging him.) Cook the eggs at no more than medium heat. Add in the cheese and the spices for the eggs while scrambling constantly. Cook eggs to desired level of doneness.

Put the buns in the pans. Cook only for a few seconds. This gives the buns warmth and taste while preserving their softness.

Cover the bottom bun with scrambled eggs. Add two slices of crispy bacon. Add the top bun. Pretend this tasty dish took a lot of effort when serving it to guests.

1) People have been preserving and salting pork bellies for over 3,000 years, but have only been freezing packaged White CastleTM hamburgers for a few decades.

2) Bacon was rediscovered by Lewis and Clark on their epic journey. I am grateful.

4) There is an institute called The Canadian Institute For The Advancement Of Bacon Studies.

5) Bacon has been used as a cure for warts.

6) The actor, Kevin Bacon, starred in the movie, A Few Good Men. I like the movie and his acting.