Posted on November 4, 2013 by pauldelancey 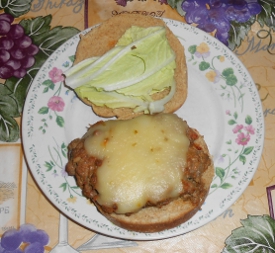 Mince yellow onion and garlic. Add onion, garlic, ground beef, gochuchang, gochucharu, and soy sauce to mixing bowl. Combine with hands. (Be sure to wash your hands thoroughly after doing this. The spices now on your hands will raise four-alarm fires if they come in contact with your face.) Cut tomato into 5 slices.

Make 5 patties from the meat mixture. Fry patties in pan at medium heat for about 5 minutes on each side or until sides begin to brown or juices from the patties run clear. Add a 1-ounce slice of pepper-jack cheese to each patties are fry for 1 minute more or until cheese starts to melt. Assemble the burgers with: buns, patty, tomato slice, and cabbage leaf.

1) Kim Jong Un, the current leader of the communist monarchy that is North Korea is said by the country’s media to be “born of heaven.”

2) As proof of his divinity, or at least greatness, the country’s government point to the lair of a North Korean unicorn. Mind you this was not the home of your run-of-the mill unicorn. Oh no, this was the abode of the unicorn ridden by Tongmyong, the mythical founder of Korea. This discovery occurred in December, 2012. This site is the only existing unicorn site. It is feared that all other such sites failed to open when they realized how outclassed they were by North Korea’s.

3) Kim Jong Un’s dad, Kim Jong II, also ruled North Korea. He too was heaven sent. We can believe it as he bowled a perfect 300 in his first game and shot five holes-in-one on his first time golfing. When he died, North Korea’s sacred mountain, Paektu, glowed red, which is way cool.

4) The most popular restaurant in Pyongyang, the country’s capital, is the New Diplo with two reviews on TripAdvisorTM.. Unfortunately, it is only available to diplomats. Career change, anyone?