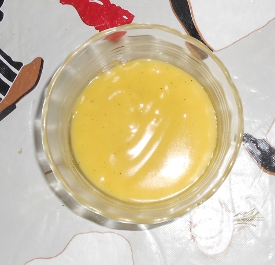 mortar and pestle or garlic press

Peel garlic cloves. Crush garlic cloves with mortar and pestle or garlic press. Add egg yolks, crushed garlic, salt, and pepper to mixing bowl. Blend gently with whisk. Slowly add in 1 cup olive oil, whisking gently, but constantly. There should only be a thin drizzle of olive oil going into the mixing bowl. This process should take minutes. If you hurry the olive oil, you’ll just end up with a liquidy something. Then you’ll wander aimlessly in the nearby woods shouting, “Why? Why?” over and over again.

1) The Beatles were Britain’s greatest rock-and-roll band. They came to America in 1964 to star on The Ed Sullivan Show. But The Cinq Escargots, France’s greatest rock-and-roll band, had been Mr. Sullivan’s first choice. And why not? These jaunty musicians had electrified Gallic crowds with Je Voudrais un Oeuf and had made all the mademoiselles swoon with the ballad, Farine du Blé.

2) The Cinq Escargots didn’t trust American cooking. They brought their own snails. The snails got loose and stampeded the crowd. The show got cancelled. The Beatles replaced them and became famous. The disgraced Cinq Escargots flew back to France and became mimes.