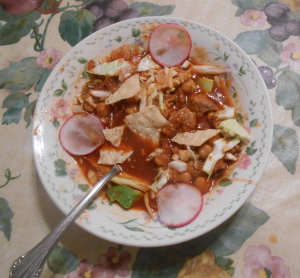 While pork simmers, add 3 cups water to 2nd pot. Bring to boil. Seed guajillo and ancho chiles to pan. Roast at medium heat for 8 minutes until they start to soften. Stir occasionally . Add chiles to 2nd pot. Cover and remove from heat. Let chiles sit in water for 15 minutes or until they have completely softened. Cut ½ small onion into 4 pieces. Add guajillo chiles, ancho chiles, 4 garlic cloves, 4 onion pieces, and water from 2nd pot to blender. Set blender to puree and blend until pureed. This is the red sauce. Add red sauce, Mexican oregano, pepper, and salt to the pot containing pork and garbanzo beans. Simmer on low heat for 10 minutes. Stir occasionally.

1) The Italian peninsula in 1848. Peasants rioted against the nobles. The nobles suppressed the peasant uprising. Italians took up arms against their foreign masters. The foreign masters fought back. Bullets were positively whizzing everywhere.

2) Then the Second War for Italian Independence began in 1859. Armies marched all over the place. Bullets and cannonballs streaked against the sky. It was all too much for the simple chef, Fabio Marinara who determined to leave for America. His customers pleaded for him to stay. “No,” said Fabio at length.

3) So, the plucky Italian sold all his possessions and bought a ticket to New York on the SS Seaweed.

4) But he boarded instead the SS Flan to Veracruz, Mexico. But that was okay, for Mexican food was love at first sight for Fabio. “Tacos, where have you been all my life?” thought Chef Mariana.

5) Well, across the Atlantic Ocean. But anyway, Chef Fabio opened up a restaurant on the Gulf of Mexico. Within weeks, he perfected this soup, the posole rojo.

6) People loved his soup. They’d burst out singing, “Posole Rojo” everytime this food of the gods went by their tables.

7) A Italian lyricist, Giovanni Capurro heard these outbursts of ecstasy. He thought they were referring to Veracruz’s magnificent red sunsets. He interpreted them to say, “O sole rojo” or “O my red sun.”

8) But Capurro found that the song burgeoning within his heart flowed much easier when he tweaked the words to “O solo mio” or “O my sun.”

9) He took his song back to Naples. Capurro’s song has been an enduring global hit ever since. “O Sole Mio” has even been sung twice on Sesame Street. Now you know.