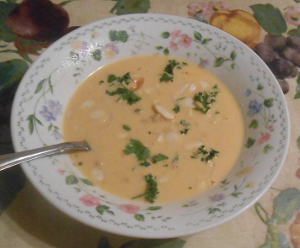 1) Last year, culinary archeologists found this painting in the Rohoño cave near Valencia, Spain. They believe it depicts a caveman giving thanks to the gods for raining down tasty almond sherry soup. (See the soup bowls at the bottom.) Conventional archeologists disagree. Prehistorians are a fractious lot. But you know, this soup is from Spain. So maybe.