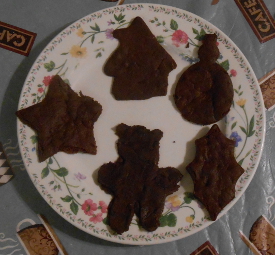 Add baking soda/brown sugar/molasses mixture to large mixing bowl. Add 1 cup of flour. Knead by hand. Repeat until all 4 cups of flour have been added. Add cinnamon, ground cloves, ginger, mace, and nutmeg. Knead once until dough is stiff and smooth. Cover and place in cool spot for 1½ hours.

Preheat oven to 350 degrees. Use up to 2 tablespoons flour to dust flat surface. Roll dough out until it is ⅛” thick. Cut dough with cookie cutter or with knife. Spray cookie sheet with no-stick spray. Bake at 350 degrees for 5-to-10 minutes or until cookies harden around the edges or a toothpick inserted into the middle comes out clean. Let sit for 10 minutes.

1) Molasses flows slowly. Hence the saying, “As slow as molasses.”

2) Slowness is relative of course. Plate tectonics, the shifting of the Earth’s plates, is even slower than molasses. Much slower. Yet no one ever says, “As slow as plate tectonics.”

3) Even so, plate tectonics is much faster than the lines at the Department of Motor Vehicles.

4) This title usually gets shortened to DMV. The department even has a long name.

5) Many people assume that the glacial pace at the DMV is a result of ever increasing swarms of people wanting to get driving permits, driver’s licenses, and to change their names.

7) People who have committed murders often change their last name to avoid detection by the police.

8) Black widows, women who marry men and murder them shortly afterward for their money, are especially avid name changers.

9) Law enforcement knows this. Which is why the DMV includes in the section under name changes the following question, “Do you marry and murder for money?”

10) This tactic worked for a while. Then would be money murderers realized they could avoid detection by simply answering, “No.”

11) So these black widows and other killers compound their crime of murder with the one of lying.

12) Soon they feel nothing about jaywalking or looking up the answers at the back of a book of crossword puzzles.

13) The downward moral spiral continues. Pretty soon the tortured soul looks at the hamburger on his plate, his second one when another guest hasn’t even had her first. He wonders how such an off-the-cuff action as murder could have such an impact on his life.

14) This is a critical moment in the murderer’s life. Confess, oh my goodness, confess. Confess and break the downward ethical spiral. Confess that you took that second hamburger. Offer it back to that hamburgerless sweetheart looking down at her empty plate.

15) Your act of self abnegation will bring a smile to her face. The fact of getting of a yummy burger will swamp her body with joy-filling endorphins. She’ll regard you as a knight in shining armor.

16) Soon the two of you will be chatting up a storm and before you know it, you are engaged to be married.

17) Now is the time when you must hold firm. Do not kill her for her money. This is your soul mate. Murder someone else. Do the murder with you new spouse. The couple that slays together, stays together.