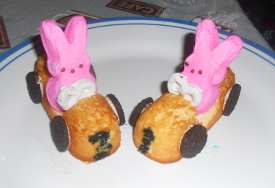 Carefully use the food-dye vial to make a number on the front and back of the Twinkie. Cut out a 1″ wide section from the middle of a Twinkie. The cut should go most of the way to the bottom. Put Peep in cut out. Put white fudge pretzel in front of Peep. Take 4 mini Oreos apart. Place the halves with the white frosting, frosting side inward, against the two lengths of the Twinkie. Repeat for the remaining Twinkies. Be sure to eat a rabbit car before the whirlwind of little ones descends.

1) It is little known beyond the Culinary Art Critics Guild (CACG) that food-dye art (FDA) almost conquered the art world in 1647. FDA began when Kurt Vurgyiks of Prague painted Czech frat boys throwing pledged nobles from the Holy Roman Empire out a castle window. Chef Vurgyiks was making his new creation, Rabbit Coaches, for dinner when he saw two bodies hurtling down past his window. He grabbed his dyes and working super fast–he had to, bodies plummeting past a window last maybe one second, tops–painted the whole event on the kitchen wall.

2) Everybody loved the rabbit coaches which have remained stupendously popular ever since, changing name only to rabbit racecars in 1972 to honor Robert “The Rabbit” Olson winning the Indianapolis 500. But wait! There’s more. All the castle nobles loved Chef Vurgyik’s painting. Soon, all Europe went FDA mad. It was the best of food-dye art and dessert times.

3) It was the worst of food-dye art and dessert times. The Holy Roman Emperor took offence at the killing of his pledges; he was known to hold grudges. He ordered the execution of the Czech frat boys for their fatal prank; then as is now, fraternity hazing was frowned upon.

5) Perhaps a quarter of the people in the war-torn regions died in the thirty-years of unceasing fighting. As a further bummer, food-dye art was banned in the conflict-ending Treaty of Westphalia. I told you the emperor could hold a grudge.