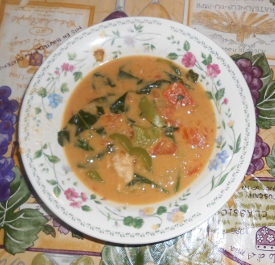 1) I looked up fun facts about Zimbabwe. I read how its current leader had the houses of 700,000 homes of poor people destroyed because they had opposed him. Boy, fun facts you betcha.

3) Devo was a famous band from the early 1980. I have one of their albums. I’ve found no evidence to back the assertion that the band was named after this stew.

4) However, if Ovid had been a member of Devo, say bass guitar, and he didn’t have a video of divo soup then Devo Ovid would have had a TivoTM divo void.