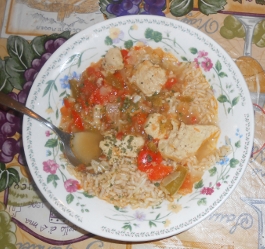 Cook rice according to instructions on package.

While rice is cooking, cut chicken breasts into 1″ cubes. (If you are using parts such as chicken legs, leave them as they are.) Mince garlic and onion, Dice green and red bell peppers. Coat chicken with black pepper, cumin, oregano, and paprika. Puree tomato.

Add olive oil, garlic, and onion to frying pan. Sauté on medium-high heat for 5 minutes or until onion turns soft. Add spice-coated chicken, bay leaf, green and red bell pepper, tomato, lemon juice, wine, and chicken broth. Bring to boil at high heat then reduce to low and simmer for 20-to-30 minutes or until chicken is cooked through. (You might have to cut off a bit and taste. Maybe taste a second piece, a third…)

Serve with rice in a bowl. Garnish with cilantro.

1) Sugar was first made into cubes in Cuba. That’s why we call sugar “cubes.” Before cubes, sugar had always been scooped.

2) People would always ask, “One or two spoons?” when serving sugar with coffee.

3) Indeed, specialized spoons were made for sugar. The first major producer of sugar spoons was Krupp of Essen, Germany.

4) Krupp made a fortune off their sugar spoons. So much so they were able to enter the burgeoning armaments industry.

5) Germany bought so much artillery from Krupp in the 1900s that it started an arms race in Europe. The heavily armed nations of Europe inevitably went to war in 1914.

6) A scarred Germany resentful of the peace terms imposed by the victorious powers in 1918 seethed for revenge.

8) The war alliance between The United States and the Soviet Union proved ephemeral. (Cool word, huh?) They soon constructed vast arsenals to intimidate each other.

9) Tensions between America and Russia lessened considerably in the 1990s when the countries’ presidents took the first step toward peace, The Lutefisk Ban treaty.