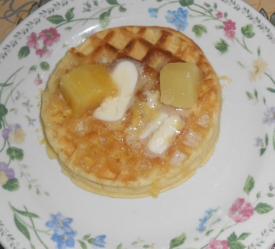 Toast waffles according to instructions on package. Cut butter into 16 pats. Combine in mixing bowl: sugar, milk, and pineapple juice. Place equal amounts of butter and mixed juice and 2-to-4 pineapple chunks of each toasted waffle. Aloha!

3) The waffle began its illustrious culinary journey during the Middle Ages. The waffle! So if someone calls this era the Dark Ages, waggle your finger at the fool and say, “Nooooo!”

4) The waffle became so popular that bloody fights became common between waffle vendors seeking prime locations. So much so, that a King of France took off time from wars and mistresses to decree a minimum distance between the warring vendors.

5) It has been said the French Revolution started in 1789 in part by disgruntled vendors seeking to throw out royal enforcement of the waffle decrees.

6) America annexed Hawaii in 1898 to ensure a steady supply of pineapple chunks in juice for its burgeoning appetite for Hawaiian waffles. A drastic measure perhaps, but it is worthwhile to note America has never since been involved in any military conflict over foreign pineapples. The same cannot be said for oil.