Posted on November 5, 2012 by pauldelancey 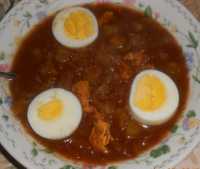 Put whole cloves and black peppercorns in spice grinder. Grind until you get a powdery substance. Crumble red recado, black recado, and bouillon cubes into soup pot. Add salt, allspice, oregano, cumin and red pepper. Pour in water and cook on low-to-medium heat with lid on for about 40 minutes or until all veggies are soft.

While the vegetables and spice are cooking, chop up chicken breasts into 1/2-inch cubes. Also, boil eggs for about 12 minutes and let them cool. Add chicken cubes to soup pot.

Ladle soup into bowls. Peel eggs and slice each three times. Put an equal number of egg slices on top of the soup in each bowl. Serve with at least two flour tortillas and one plate per person. The tortillas may be used for dipping or for making burritos from the soup.

2) Soup is an anagram for opus. Opus means an artistic work such as an opera.

3) Soup is also an anagram for puos. Puos is the plural form of puo.

4) Soup lovers in America eat about ten billion bowls of soup a year.

6) Nebraskan bar owners may not sell beer unless they are cooking soup. That and possessing a liquor license.

7) Andy Warhol ate tomato soup every day for lunch for over twenty years. He became a famous pop artist. However, hundreds of millions of people have devoured rivers of tomato soup without achieving the slightest bit of fame. So, who can say?