Posted on October 3, 2021 by pauldelancey 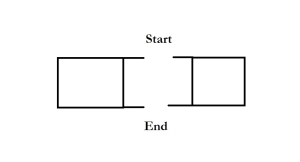 Mazes can be lots of fun. They engage the mind. Solving them can be necessary and even existential as in the case of Theseus. Theseus had promised to kill Minotaur, the half-man/half-bull beast who lurked in a huge maze. He does that.  But he had to get out again. If he couldn’t do so, he’d die of starvation. Bummer. So how did he manage to leave? He cheated. Theseus unraveled a ball of string as he went along. Then he wound up the string as he went back.

Fortunately, maze solving is no longer a matter of life and death. But they can take a while. You can get so engrossed in a single maze that you lose track of time. In fact, you even missed your court appearance. Your testimony was crucial to the prosecution. But because you didn’t show the judge was forced to acquit the defendant. Because of you, a serial killer once again stalks the street of your fair city.

It doesn’t, however, have to end like that. Simply, solve the above quick but snappy maze an hour before appearing in court. The law will appreciate you. So will your fellow citizens.