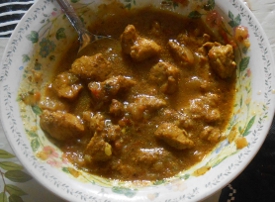 1) According to culinary historians, Scottish clansmen, from the 12th century on, would rub Scotch bonnet peppers onto their shaved heads before engaging in battle. Naturally, the fiery Scotch bonnet burned their noggins something considerable, so much so the clansmen became the fiercest of warriors. No army could stand up to them in hand-to-hand combat. “Here comes the Scotch bonnet heads” was a byword for terror for the invading English armies over the centuries.

2) Finally, the English hit upon the idea of shooting arrows tipped with lutefisk at the Scottish pikemen. The Scots retreated in terror. England and Scotland would become part of Britain. The English units lobbed lutefisk at the enemy warriors. The Scottish infantry, beserk with pepper heat penetrating their brains would smash through the disorganized infantry. It was an enduring formula for victory on the battlefield. Britain would soon conquer most of the world and there you go.