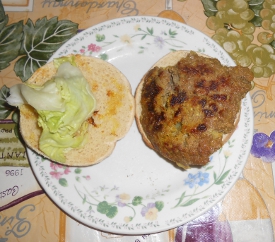 Put patties in frying pan. Fry at medium-high heat with lid on for about 15 minutes or until the insides of the patties are done to the desired level of pinkness or brownness. There should be no need to flip the patties as the lemon juice should help cook the patties evenly. Also, these patties are crumbly, so flipping them over might make them fall apart.

Toast hamburger buns while patties are cooking. Serve patties together with lettuce on hamburger buns. This burgers have a delightful spicy/lemony kick to them.

2) Later safaris included journeys for tourists who wanted to see wild animals, well, in the wild.

3) San Diego’s Safari Park has short tours where you hop in busses and jeeps and take pictures of their critters for an additional fee.

4) The Park’s expeditions are thus firmly rooted in the modern, non-violent meaning of the word, “safari.”

5) Indeed, the authorities and personnel of Safari Park who look askance at you, if you and your friends took shotguns on the tour and blasted away at the park’s wildlife.

6) They’d probably end the tour right then and there and not give you a refund.

7) One could even imagine an even more vigorous response by the folks of Safari Park, one involving, say, SWAT teams.

8) Safari Park used to be called Wild Animal Park. I prefer the old name. I like to think the animals there agree with me.