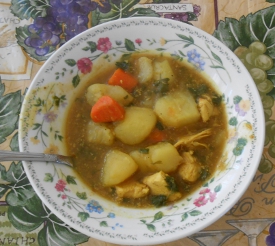 1) Hawaij is quite close to being spelled Hawaii.

2) Hawaii is the 50th state admitted to the United States of America.

3) In 1950, the New York Yankees swept the Philadelphia Phillies in the World Series.

4) The Philly cheesesteak is a deservedly famous sandwich.

5) Vampires are killed by a stake to the heart.

6) Garlic, though, keeps vampires at bay while being much smaller and cheaper.

7) There is no garlic in my recipe for hawaij. So there is none is this soup.

8) You won’t be able to ward off vampires by showing it this soup. Better to throw the soup at the vampire. Look for your stake and hammer while it’s wiping off its face. Good luck.