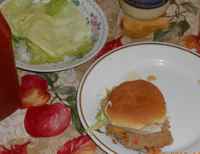 You really need a four-slice toaster. You simply cannot feed turkey burgers to a hungry horde of anguine’s with a two-hole toaster. Don’t do four bun halves, two whole buns, and rest on your laurels.

(You say you need more immediate motivation? Pretend the members of your brood have become ravenous cannibals ready to sink their razor-sharp canines into your haunches unless they get their turkey burgers.) Keep on toasting.

(And DON’T, DON’T, microwave anything while toasting. You’ll trip your circuit breaker and you’ll have to dash outside and flip the circuits. This is one reason against cooking in the nude. The other being that grease splatters.)

Remove the skin. It adds nothing to the taste, is papery, and gets stuck between your teeth. How can you concentrate on your boss’s story about mango harvesting in Tahiti when you have onion skin between your first and second molars annoying the heck out of you? Remove the skin, now.

Also cut off the root part at the bottom. It’s edible ,I suppose, but hardly tasty. If the onion has a big, green sprout in the middle, it’s because you bought it when Nixon was in office and is no longer edible.

It really helps if you have a prepared green bell pepper left over from last night’s culinary extravaganza, made from the chapter on stuffed green peppers, for example. If not, cut the top off the green bell pepper and discard, or at least discard the stem. Scoop out the innards of the pepper seeds and those four vertical, soft whitish columns and throw them away. Chop up the pepper and put it in a pan. Coat the pieces with olive oil. Use extra-virgin olive oil. (That’s the most virgin you can get, unless you went through school studying economics.)

CHOPPING UP THE VEGGIES

You really must get yourself a food processor, big or small, one with two little whirling blades. This little gizmo will make chopping up or mincing the veggies so much faster than cutting them up with a knife. If your knife is blunt, this task takes forever. And a sharp knife is just too tempting for a spouse sulking over your latest big purchase.

Get a food processor. Mince the green onions. Mince the onions. Onions are big. Be sure to cut it up into at least four sections before putting it into the processor. Chop up the bell peppers.

Get a big bowl. Put the ingredients except the bun and water into it. Mix. Mix with your hands until everything is thoroughly mixed. Your hands will get extremely messy.

(Midway through the mixing is, of course, the time someone will knock on your front door to ask you if you want your trees trimmed, even if you don’t have any. In the meantime you have dropped turkey meat all over that hard-to-justify-buying Persian carpet and of course, on the front doorknob.

This is the time to say, “Excuse me, I’ll just be a moment.” Go back to the kitchen table, pick up the sonic obliterator, and annihilate the would-be tree trimmer. Wipe up and pick up all bits of turkey meat on the way back to the kitchen.)

Make four patties and put them in your pan. The patties should not be much bigger than your spatula or they might fall apart when turned over.

Turn the heat to high to get things going and gradually turn it down to medium or medium high. The higher you set the temperature, the more closely you’ll need to watch the patties and turn them over.

Turkey meat turns white when cooked. The outside turns white before the inside does. So how do you know when it’s done? It’s perfectly acceptable for a chef, particularly one that’s starting out, to cut a small piece near the edge and look at it and taste it. If the inside of the piece is white, then it is done. Remember, if no one saw you taste the burger, then it didn’t happen.

(By the way, it is a matter between you and your God about what to do if you should drop an entire patty on the floor. Consider the cleanliness of your floor and the likeability of your guests in making your decision.)

You must flip the burgers repeatedly with your spatula. If you do not do so, the water will rise to the top of the burger and evaporate, making the burger too dry to eat. Flipping puts the water that has almost escaped on the bottom of the burger again.

Consider occasionally sprinkling water on top of the patty and pouring a thin layer of water into the pan. This adds moisture to the burger and a moist burger is a yummy burger.

Put the bottom bun–it’s flat–on the plate. Put the cooked patty on the bun and the lettuce atop the patty. (There are some heretics who put the lettuce on first, but they are being hunted down without mercy.) Sprinkle the cheese on next. If you are adventurous, pour on some ketchup. Place the top bun–-it’s dome- shaped–-on next.

You are now a culinary hero to your guests.

2) The first official listing of a hamburger on a menu occurred at Delmonico’s in New York in 1826.

3) Cheeseburger In Paradise is a great song.

4) “A turkey” is not someone from Turkey. It is a bowling term.

4) The turkey was one of the first animals in North America to be domesticated.

5) Turkeys were called turkeys in the 1500s by English merchants because they thought turkeys came from India and that Turkey owned India. Bozos.