Posted on August 4, 2016 by pauldelancey 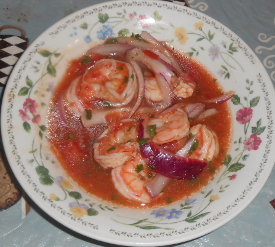 1) Shrimp ceviche is reddish-pink and tasty. Many Vikings had reddish hair and loved good tasting food. However, Vikings ate oatmeal all the time, bowl after bowl. This drove the Norsemen crazy. They started cheating at checkers and saying, “Sez you” to everyone they met.

3) The Viking women took to cooking lutefisk. the foulest smelling, most evil dish ever rather than cook another yet bowl of oatmeal. Some wives had even thrown themselves into fjords instead of doing that. Fortunately, lutefisk’s horrible smell drove the menfolk to raid foreign lands for tasty food and even gold, sometimes. The women stayed at home and played Runeble, basically ScrabbleTM with runes, and ordered Chinese takeaway.

4) In 1284, Bjorni Thorvald, discovered Ecuador, while looking for a Pokemon GoTM character. This news electrified all Scandinavia. Whole clans of blood-thirsty Vikings moved to Ecuador. This is why there are so many blue-eyed redheads there.

5) Thus, the Viking raids stopped. Relieved Europeans came out of hiding to build the Renaissance.