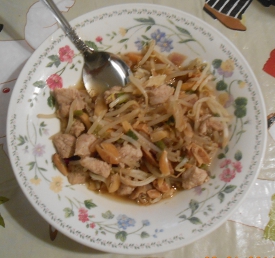 Add pork, chicken stock, sherry, sugar, bean sprouts, Chinese five spices, and ginger to pan. Cook for 5 minutes on medium-high heat for 5 minutes or until pork is no longer pink inside. (X-ray vision would be useful here. If you aren’t a super hero, it’s okay to slice open a pork cube and look.)

1) In 1764, Spain worried about Russian encroachment on the west coast of America planted almond trees along El Camino Real (The Royal Road) from San Diego to San Francisco.

2) These trees did not significantly deter the Russian military which was generally equipped with ships, horses, cannon, and muskets.

3) The Spanish then tried planting all manner of cacti in Arizona. This failed as well. The Russians weren’t interested in Arizona and the cacti proved remarkably vulnerable to flanking maneuvers.

4) In 1769, the governor of California, Don Antonio Pico de Gallo, came up with the happy idea of building missions along El Camino and staffing them with priests and soldiers. The Russians saw that the price of conquering the Golden State would be too high and left.

5) President Clinton ate almonds at both his inaugurations. Some say he did this to send a message to the Russians, but it is more likely he just like to eat them.

6) Eat the almonds, not the Russians, for goodness sake.