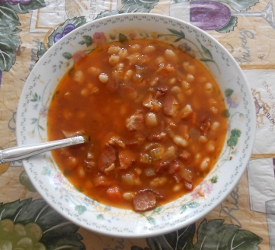 Get busy while beans are standing. Cook, fry bacon on medium-high heat in Dutch oven until crispy. (Contemplate image of beans standing at attention.) Remove bacon and put on paper towels. Remove all but ¼ cup grease from Dutch oven. When cool, crumble bacon or cut it into ½” squares.

1) According to culinary lore, Lord Sandys once asked two chemists from Worcestershire to recreate an Indian sauce. Why Lord Sandys didn’t ask two cooks instead is a mystery. Anyway, the two great men’s effort resulted in a particularly malodorous liquid; it might have stunk worse than lutefisk. The chemists moved the stinky sauce to the basement. Why didn’t they just throw it out? Years later, they tasted it again. These men truly did not fear death. But it tasted great.

5) There are lot more establishments selling beer than ones offering fermented fish.

7) Oh my gosh, further research suggests that tidbit 1) is actually true and that L&P still make their sauce that way. I guess fermenting fish is pretty much like aging wine. Who knew?

8) In 1919, Worcestershire sauce was advertised as a way to grow beautiful hair.

9) I would think rubbing Worcestershire sauce on your head would make you smell like steak. Dogs would love you.

10) A famous photo from 1938, shows dictator Benito Mussolini and Prime Minister Neville Chamberlain alongside one of Lea & Perrin’s bottles.

11) It’s quite unlikely Mussolini rubbed the steak sauce on his head. The despot was entirely bald.

12) For Worcestershire sauce rubbed onto a man with a full head of hair isn’t visible. Oh sure, you can smell it, but you’re never quite sure if you’ve pinpointed the location to the right person.

13) On the other hand, Worcestershire sauce, or any other brown sauce for that matter, would have been quite evident on Mussolini’s bald dome.

14) One can imagine the rulers of Ethiopia and Albania pointing at the Italian dictator’s sauce-smeared head and laughing.

15) Mussolini would have wanted revenge for these insults. As a dictator, he could get it too. So, Benito had his armies conquer these countries.

16) Hitler saw how easy these conquests were and in 1939 invaded Poland. Great Britain and France declared war in response. And so, World War II began.

17) This is a cautionary tale. Always use good manners. Never make fun of people. The welfare of the world is at stake.