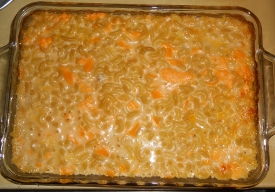 Preheat oven to 360 degrees. Cook macaroni according to directions on package. While macaroni is cooking, melt butter in pan using medium heat. Add flour, milk, pepper, and salt.. Cook over medium heat for about 10 minutes or until mixture thickens and bubbles. Stir frequently to keep milk from burning. Remove pan from heat.

This dish is simple and wonderful. You will feel at peace with the universe. You won’t even mind calling your insurance company after dining on this.

1) This recipe uses elbow macaroni. Americans use their elbows to eat macaroni and cheese. This dish also has American cheese, the primary ingredient in nacho cheese sauce.

4) Then when someone takes the lid off the pot, everyone gets splattered with molten nacho cheese sauce. People yell out in pain. The loud noise causes an avalanche. People panic. People jump in crevasses. The Nepalese army gets called in. It takes them hours to retrieve everyone. The Nepalese government protests to your government. The world inches closer to war. Cooler heads eventually prevail, but it is a near thing. So, always employ culinary caution wherever you go.