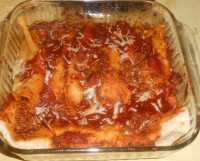 Heat the tortillas for about 20 seconds in a microwave to make them easier to roll. Pour enough oil to cover just the bottom of the saucepan. Put the pan on the BACK BURNER. USING TONGS, dip one tortilla at a time quickly in the hot oil. If the tortilla spends too much time in the oil or if you take too long to put it on a plate, the oil-dripping tortilla will fall apart; have extras until you get the hang of it.

(Try to keep up with the cleaning as you prepare the food lest your guests call the bomb squad upon arrival. Being a suspected terrorist is a true resume stain.)

Add about 1/12 of the fillings’ ingredients. Roll each tortilla and put it against the side of the baking dish or as close to another rolled tortilla as possible.

Pour the sauce evenly over the tortillas. Sprinkle any remaining ingredients on top. Bake at 350 degrees for 20 minutes or until any cheese on top bubbles.

2) Some people assume that enchiladas only have cheese in them. So it’s a good idea to tell people this dish has meat in it, particularly if you think they might be vegetarian.

3) Mexican cuisine is quite friendly to vegetarians.

4) A distant relative of mine, Emperor Napoleon III of France, tried to conquer Mexico in the 1860s. I had nothing to do with this venture. I wasn’t even born.

6) If the Mexican president ever asks me over for dinner, I shall return the favor and ask him over to my home in Poway for some really good eats.