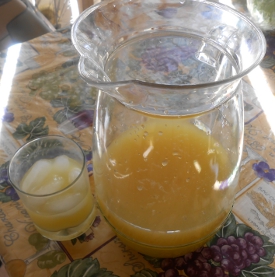 Use long wooden spoon to mix all ingredients in pitcher. Stir until sugar dissolves. This goes well served over ice.

2) One of the most popular sports televison ever was “The Wide World of Sports.” The intro to the program shows an athlete performing a great feat to the “thrill of victory and an athlete failing to the words “the agony of defeat.

3) The victorious athlete changed quite a few times. However, the failing athlete was Vinko Bogataj. Vinko wiped out in spectacular fashion just moments after starting to ski down a steep slope. Vinko remained blissfully unaware that tens of millions of people had been watching his snow tumble every week for twenty years.

4) Success is overrated. We remember spectacular failures. We embrace them.

5) Eddie the Eagle represented Britain in the 1988 Winter Olympics. He would soar like an eagle with folded wings. Eddie’s ski jumps brought him last place in every event he entered. He might have set records for the short jumps if the Olympics had bothered track such a thing.

6) Naturally Eddie became a national hero. The world remembered his name for decades. The winners in the ski jump? Tee hee.

7) Who can name a movie about bobsled gold medals? No one. Well, practically no one. But millions have seen the movie about the Jamaican bobsled Olympians, “Cool Runnings.” They didn’t win a medal. They only achieved cinematic immortality.