Caramel Corn and Staying Alive at the Movies 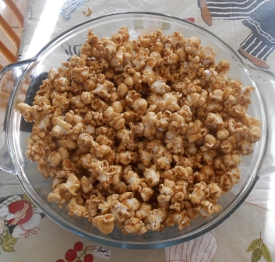 Preheat oven to 200 degrees. Pop popcorn according to instruction on bag or from popcorn popper. Remove all unpopped popcorn. (Peter Piper popped a peck of popcorn.) Put popcorn in large mixing bowl.

1) Everybody loves caramel corn, hard-working people and politicians too. However, not everyone likes to hear popcorn being eaten. In 2011, a Latvian movie goer was arrested for shooting another man dead for eating his popcorn too loudly during the film Black Swan. The dead man would have been safer eating caramel popcorn as it’s not nearly as crunchy as regular popcorn.

2) Or if you don’t wish to get shot during movies but still wish to munch on regular popcorn, may I suggest going to a comedy? The film goers’ laughter will mask the sound of your popcorn chomping.

3) As a public service to you popcorn lovers, here are my favorite all-time gun-shot-free-funny movies: Bananas, The Bank Dick, Bringing Up Baby, A Christmas Story, The Court Jester, Duck Soup, Father of the Bride, A Hard Day’s Night, It’s a Gift, Miracle of Morgan’s Creek, One, Two, Three, The President’s Analyst, She Done Him Wrong, A Shot in the Dark, Tight Little Island, Tootsie, and Unfaithfully Yours.

4) There, I am bringing peace to the world. I shall certainly be getting the Nobel Peace Prize soon. Taps foot.