MEATBALLS IN CURRY
(boller i karry) 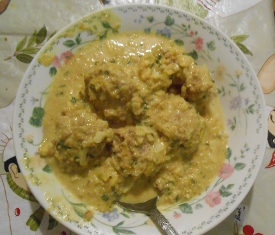 Serves 6, particularly if everyone eats 1/6th of this.

Add beef stock to large pot. Bring beef stock to boil on high heat. Carefully add meatballs to pot. Reduce heat to low and simmer for about 20 minutes or until meatballs begin to float. Remove meatballs from pot and set aside. Save the beef broth in pot.

1) The meatball is really a smaller version of meatloaf. Some people have meatballs as a topping for their pizzas.

2) Wouldn’t a meatloaf pizza be exciting? Imagine getting a 16″ pizza topped with three 9″ by 6″ meatloaves. It would feed an army.

3) The Roman Empire is known for its all conquering armies. It’s less known for its culinary achievements. That’s a shame as Rome is the birthplace of the meatball. Rome rocks.

4) Okay, ancient Rome didn’t rock for everyone, the slaves, for example, come to mind as do the people of the many conquered nations.

5) One might wonder how the Roman Empire kept all its conquered peoples from continually revolting. After all, the legions marched everywhere and took longer than waiting in lines at Disneyland to get from their barracks to disaffected regions.

6) The answer is in the massive stockpiles of meatballs kept at all the crossroads of the Empire. As long as the Roman authorities could rush meatballs to its conquered peoples, no riot ever grew so large the slowly arriving legionnaires couldn’t handle it.

7) Rome almost fell to barbarians, in the third century A.D., when they lost the province of Dacia with its rich cattle lands. Fewer cattle, fewer meatballs. Fewer meatballs, more riots. More riots not stopped with meatballs, more revolts. And that meant legions got withdrawn from the frontiers to put the revolts. Barbarians poured across the sparsely defended border.

8) It really appeared as Rome was going to fall. Fortunately the cattlemen of Dacia organized cattle drives to still safe provinces such as Cisalpine Gaul and Thracia. “Head ‘em up, move ‘em out.” Meatball production bounced back within a few decades and the Empire recovered.

9) In 405, however, the health sage, Atticus Bananicus, convinced the legionnaires to go vegetarian. As a result, many of Rome’s cattlemen switched to raising free-range chickens.

10) But in 406, Bananicus was seen by legionnaires eating a meatball pizza. The dormant meatball tastes of the Roman soldiers came out of hibernation. All at once, every soldier demanded meatballs. But there were no longer enough meatballs for the army and the peoples of Rome. The army garnered all the meatballs, leaving none for the restive populace. Unquenchable revolts erupted everywhere. The entire Roman army abandoned the frontier, getting decimated putting down the ferocious uprisings.

12) Alaric and the Visigoths–that sounds like a 60s rock band doesn’t it?–sacked Rome in 410 A.D.. The Roman Empire never rebounded from this disaster and soon collapsed. Always keep meatballs in your refrigerator. It’s frightening to contemplate what would happen if our supermarkets ran out of that peace-ensuring food.

13) Food connoisseurs are invited to read book II of Marcus Gavius Apicus’ “De re coquinaria libri decem (Cuisine in Ten Books)” to see the world’s first recipe for meatballs. And feel at peace.